You are at:Home»Current in Carmel»Blake lends hand to Ram’s event 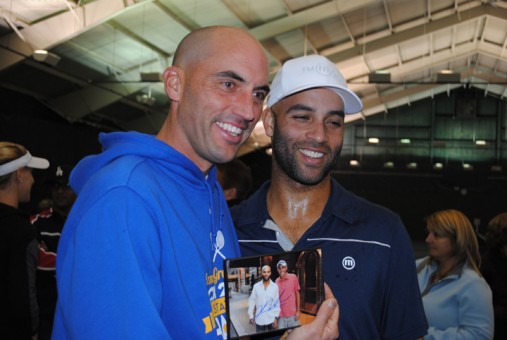 Carmel High School girls and boys tennis coach Mike Bostic gets his picture taken with James Blake holding a picture taken of the two of them when Bostic ran into Blake while attending the U.S. Open in New York. Blake earlier autographed the picture. (Photo by Mark Ambrogi)

Even during the height of his professional tennis career, James Blake always placed a high priority on charity tennis exhibitions.

“I always look at the matches I did the end of the year as the most important ones,” said Blake, who participated in Carmel pro Rajeev Ram’s EntouRaj for Kids on Nov. 21 at Carmel Racquet Club. “The matches during the season are pressure-filled and you are earning your real living doing it. Those are the ones you play so you have the opportunity to play the ones in the off-season when you have a chance to make a difference where you can help kids go to college like Raj is doing. For me, it’s helping people fight cancer.”

Now retired from the ATP Tour, Blake competes on the PowerShares Series Tour, for former champions. Blake turns 35 on Dec. 28.

“It’s a lot of fun to dust off the rackets and play with a good friend like Rajeev,” Blake said. “When you get to do it for a good cause, it’s special.”

Blake, once ranked as high as No. 4 in the world, has fond memories of Indianapolis. Blake won one of his 10 tour singles titles at the now-demolished Indianapolis Tennis Center, beating Andy Roddick in three sets in the 2006 RCA Championships final.

“That match was a fun one and the whole week was great,” Blake said. “I had some success in Indy. I know Raj is the hometown kid but I still felt some love from the crowd.”

“He obviously can still play at high level. Thank goodness, he’s not playing on the tour anymore,” said Ram, laughing.

WTA Tour pro Alison Riske and UCLA tennis player Jennifer Brady competed in the event. Brady subbed for Melanie Oudin, who had to withdraw after having a heart procedure because of an accelerated heartbeat earlier in November.

“Adding the girls in there was great,” Ram said. “The mixed doubles was a lot of fun. We had a great crowd and great support.”

The event drew about 350 tennis fans. There was auction which included auctioned autographed rackets and lessons by the pros. Approximately $40,000 was raised for the charity after expenses, according to event organizers.

“Tennis is such an individual sport but it turns into a community where everybody helps everyone,” Blake said. “You can’t do these events on your own. You need help.”