You are at:Home»Current in Carmel»Carmel Community»Off-Main Street Players enjoy diversion from everyday life 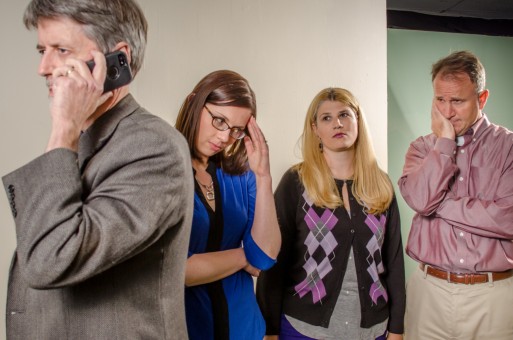 Koleszar is performing in Zionsville Community Theater’s Off-Main Street Players’ showing of “God of Carnage.” The one-act, 90-minute play includes four performers. The black comedy, which won the 2009 Tony Award for best play, centers on two couples from Brooklyn who get together after their 11-year-old sons are in a playground fight.

The Off-Main Street Players’ first performance was in 1966. That first group eventually disbanded but reformed in 2005.

Marcus Waye, a 41-year-old Fishers resident who appeared in the reformed Off-Main Street Players’ first production as a bell hop in “Plaza Suite” in 2005, is directing “God of Carnage.”

After being asked to direct this fall, Waye recommended the show because not many theater groups have done it.

“It seemed like a good fit for the venue and the people we could cast,” said Waye, who works in the IT department at Carmel Clay Public Library. “Just seemed like a natural fit for me because it’s a comedy and I like comedies more.”

This is the sixth play Waye has directed for the Off-Main Street Players.

“Whatever I’m doing is my most favorite at the time,” he said. “If I’m acting, I really enjoy that. If I’m directing, that seems to be what I really like.”

Carmel resident Tanya Haas, 42, said she considers it more of a drama with comic elements.

“This is the first time in a very long time I’ve had a fairly dramatic role, so it’s been a different experience,” Haas said. “The whole play is a roller-coaster ride.”

Haas is a part-time middle school drama teacher at Midwest Academy in Carmel.

“I just enjoy getting out of my regular life and getting to pretend to be other people for a while,” she said. “It’s the only thing I do just for me.”

Dr. Larry Adams, a Brownsburg resident who has his family medicine practice in Zionsville, has a similar reason for acting.

“It’s that opportunity to step outside of yourself and put everything else behind you,” said Adams, who began acting in 1988. “You can’t take the rest of your life on stage. You can be that different person for a short period of time.”

“My mother started doing it after my father passed away and I watched her and thought, ‘That seems like fun, I’ll try it,’” Adams said. “By that time I was in residency. I was a latecomer.”

For 51-year-old Zionsville resident Kirk Horn, this play is a new acting experience.

“I have to come to practice every night,” said Horn, an attorney with Mandel Horn law firm in Carmel. “I’m never off stage. I’ve never had experience like this before. If you screw up, it snowballs, I assume. I’m just kidding.”

Tickets: To purchase tickets, visit www.offmainstreetplayers.org/box-office or call 595-3700 and leave a message at the box office. Tickets are $12.

The play is not recommended for those 16 and under because of adult situations and strong language.