You are at:Home»Current in Carmel»Haunted houses that you can buy

The cold autumn wind cuts through the twisted branches of a long-dead tree as you walk down the dark street. The bare twigs scrape eerily on the window pane as lightning flashes in the distance. Out of the corner of your eye, a shadow moves. You turn to look, but the shadow is gone. You’re left standing, staring through the front window of an old abandoned mansion, across the street.

Tales of grisly murders surround the old place and the hairs on the back of your neck stand up as the facade of the creepy old manse stares back at you. To your surprise, you see a ‘For Sale’ sign swinging slowly in the wind, through bursts of lightning. Do the walls of the master bedroom bleed at midnight, like you’ve heard? Or is it really just a classic Victorian, remodeled with contemporary fixtures and appliances and priced to sell? Are those bumps in the night dead demons walking the halls or the bass from the newly installed full-house stereo system?

The only way to find out the answer to this dark mystery is to dig into this year’s ‘Top Ten Haunted Homes for Sale’ list. One must be strong of heart when touring these homes where ghosts play and devils dance in the stories rumored about these estates. Everything from scary mansions to Dracula’s Castle to famous television show homes on this year’s list, so jump right in. If you dare! 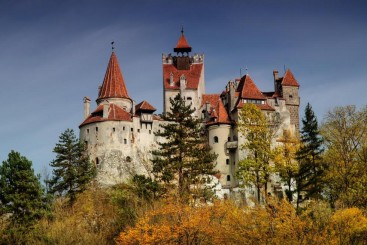 Bran Castle. It isn’t a high-end European retreat where health seekers can go to get a dose of vitamins and fiber in their diet. No, the legend of this nightmare palace is much more sinister in fiction and in reality. Bran Castle was home to one of the most notorious monsters in literary history – Count Dracula. No other name elicits more fear and respect in the world of horror than Dracula. His dark powers and blood lust are legendary. On par with the count himself is the castle Bram Stoker reportedly based the Lord of the Night’s home after.

Bran Castle is nestled in the heart of the mountains in Romania – formerly Transylvania. 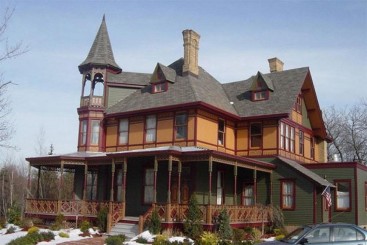 Kill Road. Never was there a more appropriate road for a home to be nestled on than this one. The history surrounding the Victorian estate is a dark and haunted one. Tales of mysterious fires, multiple suicides, wandering spectral couples and crying ghost children wreathe the Staten Island manse. Oh yeah, there was also a grisly mob hit in the home. There is that too.

Originally constructed in the mid-1880s by wealthy brick magnate Balthasar Kreischer as one of a pair of mansions for his family, the fourteen room home (which is oddly lacking in brickwork for the home of a German brick millionaire) is all that’s left of the Kreischer legacy. The second home mysteriously burned down during the Great Depression. The brick factory, which the sons inherited after their father passed away just one year following the construction of the homes, burned down as well. The sons rebuilt but the factory never regained its original glory and the family fortune dwindled. Balthasar’s son, Edward, distraught with the losses, killed himself, and his wife allegedly did the same. Their spirits are said to be the ghostly couple that reportedly wanders the grounds to this very day.

The home was converted into a restaurant in 1996, but the true terror surrounding the 3,300-square-foot structure is the grisly mob hit that took place in 2005 when Joe “Joe Black” Young slit the throat, stabbed, drowned in an ornate pond (which is one of the home’s nicer features), dismembered and then burned in the basement furnace the body of victim Robert Meckelvy. Which as we all know, aside from a serious crime, is also a huge health code violation for a restaurant.

This mansion looks like it crawled out of every horror movie combined. If the Adams family were the interior designers, then Satan was the architect. The home does have its own ghastly charm and the realtors who list this home at $12 million say that it has “endless possibilities” and “a wraparound porch.” Well if a wraparound porch doesn’t help you ignore the bloodstains, ghosts and bumps in the night…we don’t know what will. 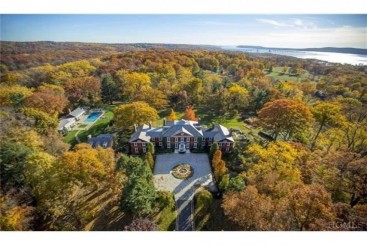 Elm Street, Murderer’s Row, Sleepy Hollow Road, Wall Street…all roads that pave the way to spine-tingling terror! Sleepy Hollow Road, the mythical byway that inspired the legend of the headless horseman, a nightmare dreamed up by author Washington Irving in the form of a decapitated Hessian artilleryman that rises nightly from his grave riding up and down the road searching for his lost head, is the backdrop for this gory tale. Ichabod Crane lost his life to the horseman when he was struck down by the ghost rider’s flying pumpkin…it doesn’t sound that scary when spelled out like that.

The Georgian manor, built in 1929 by architect to the wealthy, Mott Schmidt, for banker William S. Lambie is nestled on a secluded 16-acre parcel of land not far from the famed Hudson River. The house, whose style could be best described as “muted opulence,” has no real tales of haunting within its walls. So any potential buyer can feel sure that in any of the eight bedrooms or ten bathrooms inside the 13,242-square-foot mansion, they’ll be living a ghost-free lifestyle.

A heads up! The price of this piece of architectural mastery has been reduced from $10.9 million to $9.8 million, so if you can afford it you should jump at this chance to buy a piece of history. Just a word of advice though…we wouldn’t recommend any midnight strolls. Watch out for flying pumpkins! Don’t lose your head!