You are at:Home»Current in Fishers»Fishers teen band plays for a purpose 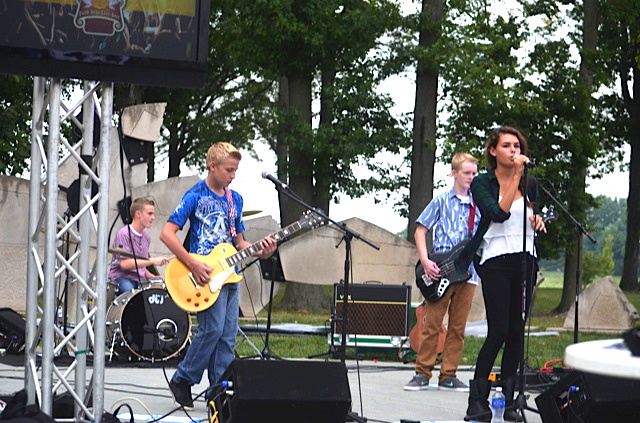 Midnight Run is an up-and-coming, award-winning teenage band whose members are more interested in helping others than in trying to become rock stars. They are talented musicians who have played all over the Hamilton County and Indianapolis areas and have caught the eye of one of Indiana’s top musical acts.

Band members include lead singer Courtney Neely, 16, Brandon Hughes, 13, on lead guitar and backup vocals, J.D. Hughes, 15, on drums and Drew Chaffee, 13, on bass guitar. Brandon and J.D. are brothers and all the kids attend schools in Fishers and Noblesville.

“We just want to help others,” said Brandon. “If we can, we try to raise money for charity with every gig.”

Midnight Run has been a featured band for Pub Theology events, which are billed as a party with a purpose and are held at area restaurants and other venues. According to Rick Hughes, father of band members Brandon and J.D., Midnight Run helped Pub Theology raise over $40,000 for two local children at Riley Hospital for Children.

Midnight Run plays a wide variety of music and tries to focus on what the audience wants to hear. The band covers songs from artists like One Republic, Tom Petty, Foo Fighters, Maroon 5 and more. Recently, Midnight Run was awarded “Best Cover Band” from a field of 80 acts providing course entertainment for the Indianapolis 500 Festival Mini-Marathon.

“We just wanted to play at the festival to get experience and exposure,” said J.D. “It was amazing to win Best Cover Band. We were shocked.”

Popular local band The Flying Toasters is also impressed with Midnight Run. “I think it’s awesome to see these young kids playing rock ‘n’ roll and they do it on such a high level for their age,” said Jason Hayes, front man for The Flying Toasters. “I’ve met with them at rehearsals and I’m almost like a band coach. I definitely want to get them on stage with us in the future.”

“I love seeing the band use their gifts to benefit others,” said Rick Hughes. “They just love to entertain people and they all love to play for a purpose. It’s awesome to see their generosity at such a young age.”