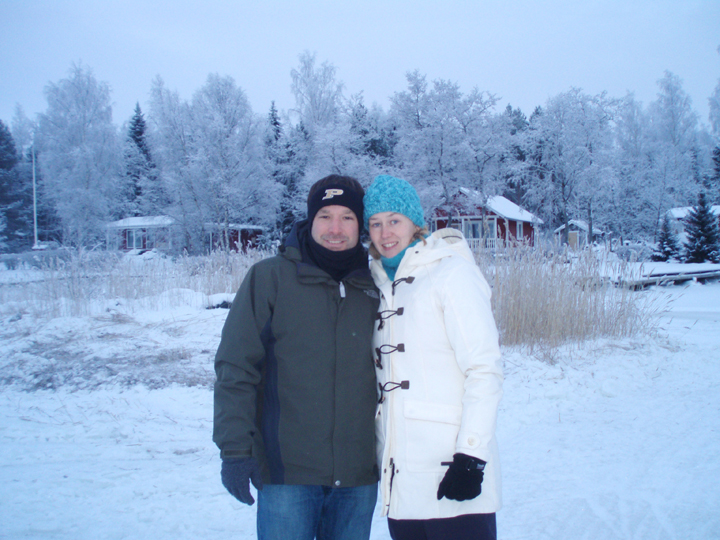 Derek and Petra Sutton stand on the frozen Gulf of Bothnia, which separates Sweden and Finland.  In good winters visitors drive across the ice to visit cottages in the background. (Submitted photo)

Carmel’s internationally famous roundabouts are helping Derek and Petra Sutton feel at home here in Indiana. They are daily reminders of the couple’s life in Sweden.

The Suttons recently moved from Stockholm to Carmel after Derek signed on as the statewide engineer for Aqua Indiana, an Indianapolis company that works with public drinking water and wastewater.

“We moved back to the Indianapolis area to be close to my family,” Derek said. “Carmel felt like the best fit for us due to our passion for enjoying the outdoors. Carmel has done a great job of building biking and walking trails similar to those in Europe and around Stockholm. You feel more comfortable being out when there is separation between from the heavy traffic here in Indiana.”

Derek had already established his career in water systems engineering when a chance meeting changed his future. While vacationing in Florida, he met Petra, a native of Finland, who was enjoying sunshine over the Christmas holiday. Love blossomed, adventure called, and Derek found himself working as a consultant on water projects in Sweden.

Sweden, about the size of California, is home to 9.7 million people. Enjoying nature is more than just part of Swedish culture, it’s a right that Swedes take seriously. Derek said the Right of Public Access (Allemansrätten) means everyone is entitled to hike through forests and fields to pick berries and mushrooms without asking the landowner’s permission. Visitors have an obligation to respect the natural environment and private property.

Derek said this environmental ethos carries over to attitudes about water, which covers nine percent of Sweden’s total landmass.

“Swedes expect water to be pure and clean. They believe you should be able to drink from lakes or streams. Tap water is actually preferred over bottled water, which is hard to find,” he said.

Irrigated lawns are as rare in Sweden as traffic roundabouts are in most of Indiana – except Carmel. Sutton said he and Petra enjoy the roundabouts.

“They are predominant in the suburbs of Stockholm,” he said.

His engineer’s brain appreciates the continuous traffic flow and the fact that roundabouts slow traffic to safer speeds.

“We do miss Sweden’s public transportation. The bus, train, rail and subway system around Stockholm is awesome. You can live without a car there,” he said.

The adjustment to Indiana’s culture for his Nordic wife has been eased by getting acquainted with Swedes who live in the Carmel area.

“There is even a Swedish school that meets on Sundays for the children to stay active in the language and culture. Most are Eli Lilly transplants here on working assignments,” Derek said.

The Suttons were surprised to meet a Finnish woman with a family connection who lives nearby.

“Petra and this woman’s husband are distant relatives and from neighboring villages in Finland. They were both able to find one another in genealogy records,” he said.

A trip to the supermarket or restaurants is another opportunity for contrasting cultures. In Sweden, mayonnaise, ketchup, mustard and caviar are commonly sold in tubes.

And at restaurants, Derek said, “Swedish food has more fish than the typical Hoosier menu. But the best part of the Swedish cuisine is the diversity available from the immigrants that call Sweden home. There is Thai, Lebanese, Greek, Balkan and many others available that are so good. I did miss Mexican, though. Indiana has better Mexican (food).”