You are at:Home»Current in Carmel»Carmel Community»Fishers Renaissance Faire celebrates its 10th anniversary as one of the most popular events of the year 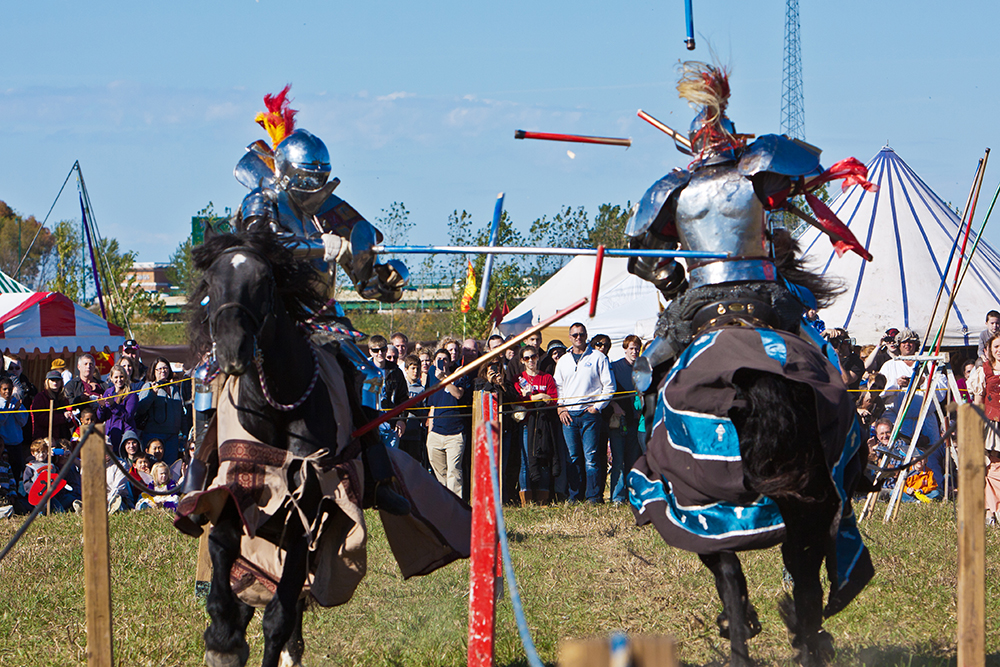 Jousting is one of the highlights of the two-day Renaissance Faire events held at Saxony Village at 131st Street and Olio Road to raise money for Sisters Cities of Fishers. (Submitted photo)

There’s only one event I can think of that can boast this lineup:  swordplay, jousting, Queen Elizabeth (the first), knighting ceremonies and Shakespeare vignettes.  Yes, it’s time for Fishers’ Renaissance Faire.

Ren Faire, Oct. 4th and 5th, this year celebrates its 10th anniversary which is saying a lot for an event that had trouble finding a home in its first year.  The original intent was to come up with a signature event for the non-profit organization Fishers Sister Cities which, among other things, exchanges students and teachers between Fishers and its sister city, Billericay, England.  Diane Eaton, then-president of Sister Cities and committee member Walt Bagot came up with the idea of a Renaissance Faire.  There are many around the country, but there was nothing like it in our area.  After several years in different places, including Conner Prairie, the Ren Faire now makes its home, appropriately, at Saxony Village at 131st St. and Olio Rd.

The faire may have had trouble finding a home at first, but it didn’t have trouble finding attendees and was a success from year one.  According to Ren Faire executive director Adam Fivush, it continues to increase in popularity and is second only to Fishers Freedom Festival in attendance.  “The faire has been growing steadily each year.   The demographics have changed significantly. The first faire was a local event attended by mostly Fishers residents.  In year 8,  70% of the patrons did NOT come from Hamilton County,” he says and adds that people come from all over the state with 7% coming from outside Indiana,  “The faire is becoming a tourist attraction and is the only event in Hamilton County that brings in so many patrons from out of the area,” said Fivush.

He also claims that it is unique because it is the biggest one-weekend faire in the country and rather than being a business like most are, it is a fundraiser, which Fivush said allows them to keep it more affordable for families.

Fivush is one of 250 costumed characters that will play roles during the festival.  He says there is an audition process for anyone who wants to get involved.  “New cast members are usually cast in the role of a peasant or constable.  If they fit into one of our stock costumes for the Queen’s Guard or Queen’s Household, they may also end up in those roles.  The following year, a cast member may request a change into one of the other areas such as the nobles, middlings or faerie.  We accept anyone who wants to join us and we train all year with workshops dealing with costume design and construction, history, and street theatre,” he explained.

Tim Hoke, who performs as a minstrel, has been a cast member since year two and says he speaks in Basic Faire Accent most of the time during the show.  “I seem to be able to switch back and forth rather easily. I don’t practice it, per se, but my son and I sometimes speak in it for our own amusement, especially in the car,” he said.

Linda Eberharter has participated for five years and says she is honored this year to be playing Queen Elizabeth.  “I have always been interested in this time period, so the event that happens not just here but all over the country intrigues me,” she said and added, “It’s a piece of history, along with the culture that I think just oozes from the entire production.”

Douglas Whisman, a Ren Faire committee member, says there are some interesting historical facts about the faire.  “It incorporates real places and people (historical figures) in Billericay, England.  Examples of this:  The [wishing]well at the faire is a reference to the real well in the middle of Billericay, England — the well dates back to Roman times.  The beer tent is named The Red Lion, which really exists in Billericay.   The cast of characters are also named after real people who lived several hundred years ago in Billericay.  The historical register was searched in Billericay for people of that era. Their names were used by our cast.  So those are a few examples of the historical aspect of our faire,” said Whisman.

But is it a faire that is right for you?  “Anyone interested in history or gets a thrill at fantasy or knights in shining armor, and an overall magical feel, will have a ball at the faire.  Additionally there are numerous artisans with unique items for sale.  And the food is fantastic,” according to Eberharter.

They all agree that it brings something different to Fishers;  “a weekend of fun for the whole family; unless it rains; then it brings a lot of people in strange, wet outfits,” joked Hoke.

So, brush up on talking like Shakespeare and head out to the Ren Faire for a jolly good time.  For more information, visit fishersrenfaire.com.