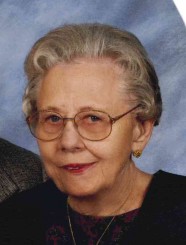 Ruthellen Rahke, of Carmel, was born September 20, 1925 and died on her 89th birthday, September 20, 2014.  She was proud to be a native of Carmel, born to the late Clifton and Azulka Arnold Johnson.  In her earlier school years, Ruthellen attended the Indianapolis Blind School and later graduated from Carmel High School in 1945.    She and Carl enjoyed square dancing, camping, playing cards, watching sports and simply spending time together.  Her memberships included the Carmel Historical Society and LEMRAC.

Family and friends gathered for her funeral on Sept. 27 at United Methodist Church, of which Ruthellen was a member her entire life.   Memorial contributions may be given to the Alzheimer’s Association.