You are at:Home»Current in Carmel»Carmel Community»Former Purdue professor recieves $1M grant for what he calls “a big hobby in retirement” at The Barrington of Carmel 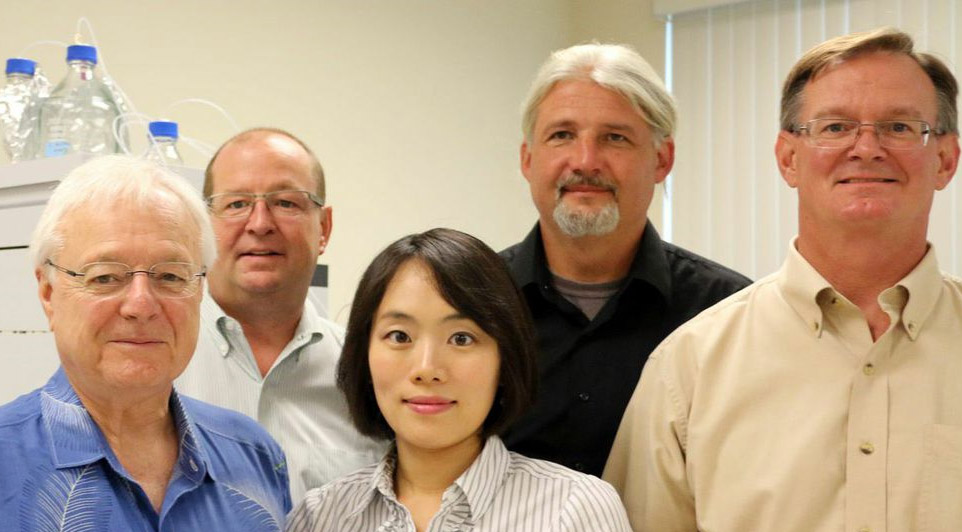 Dr. Fred Regnier has received numerous awards and recognition on national and international levels spanning from the 1980s to present. Such honors include The Pierce Award in Affinity Chromatography from the International Society for Affinity Chromatography and The American Chemical Society Award in Separations Science and Technology among several others. He started out as an assistant professor in biochemistry at Purdue University and retired last summer as the John H. Law Distinguished Professor of Chemistry Emeritus. Throughout his career as a professor and now in retirement at The Barrington of Carmel, Regnier has been working at The University and with his colleagues at Novilytic, a company he co-founded, to simplify the process of blood analysis and develop a groundbreaking plasma extraction device called Noviplex that prepares a drop of blood for analysis by mass spectrometry.

The Noviplex Card enormously simplifies blood collection, especially in developing countries, rural areas and places where physicians do not have a blood preparation laboratory. The great advantage of the Noviplex plasma extraction device is that it is a small, disposable card, slightly larger than a credit card, which allows for blood sampling from a finger-stick as done by diabetics and requires no energy source. Samples can be collected either in a physician’s office or by in-home sampling. A dried plasma spot is obtained on a piece of paper within 20 minutes of a finger-stick and then can be mailed to a laboratory for analysis without the need for freezing during transport. This approach can replace the classical venipuncture sampling method, and Regnier’s team recently received a one-million-dollar Small Business Innovative Research (SBIR) grant from the National Institute of Health to further advance the technology. His work and the progress being made are remarkable, but so is the way he describes it all.

“I like to look at my work with Novilytic as a really big but enjoyable hobby,” said Regnier. “I consider myself retired and have been glad to move myself and my wife into The Barrington retirement community, but I am also fully committed to seeing Novilytic and the pioneering technology we have developed become a big success.”

Regnier genuinely enjoys what he does with the research and work involved in the development of the Noviplex Plasma Extraction Card. He is able to devote his focus to this project but also know that he can walk away from it whenever he is ready. It gives him a sense of fulfillment and keeps his life fresh and exciting – full of discovery with new concepts and challenges to tackle.

“Many think about retirement in a seemingly negative way and feel that it requires walking away from something completely,” said Regnier. “I believe, just because you retire doesn’t mean you cease to do certain activities you like or stop trying new things. There is still so much we as older adults can do post-retirement. I hope the level of my involvement in this company during retirement proves that.”

Regnier and his team are thrilled with this most recent grant to help them move forward in their work together, and he personally often puts in about 10 hours a day. However, he sees it as an opportunity to continue doing what has always fascinated him and never lets it become a stressful or tiring ordeal. The company’s hard work and dedication has been rewarded not only with the recent grant, but withrecognition from Research & Development (R&D) Magazine as being a “Top 100 Winner.” The technology behind Noviplex brings convenience and reduced costs associated with plasma sampling, and thereby, creates access to complex bioanalytical and in vitro diagnostic technologies in isolated locations like those in the developing world. In addition, the team has earned awards from pharmaceutical companies, and the Noviplex cards already are being used by the CDC.

“We are so proud to have Dr. Fred Regnier and his wife living here and calling The Barrington home,” saidTroy Cannaday, Executive Director at The Barrington of Carmel. “The work that Dr. Regnier is doing is truly amazing, and we congratulate him on every award and recognition he continually receives. He and his wife, Linda – our Resident Council President for the community – are two of many wonderful and active residents who prove that there are countless ways to continue working and serving or giving back after retirement.”

Regnier has cofounded several other companies including BioSeparations, PerSeptive Biosystems – now part of Applied Biosystems, Beyond Genomics and Perfinity Biosystems. He also is a board member for several companies and has published more than 300 journal articles and 70 book chapters and reviews. He holds 50 patents and has been a keynote speaker for major conferences and international meetings, most recently – the 17th Annual Meeting of The Israel Analytical Chemistry Society. To learn more about Novilytic Labs visit: http://www.novilytic.com/index.php