You are at:Home»Current in Zionsville»A celebration of St. Francis 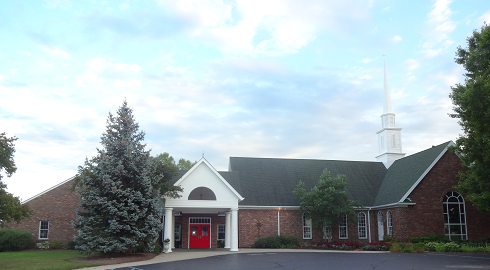 St. Francis-In-The-Fields is at 1525 Mulberry St. in Zionsville. (Submitted photo)

This weekend the congregation of St. Francis In-The-Fields Episcopal Church will be celebrating its 50th anniversary as a church with The Gala 50th weekend events.

With more than 350 members from around Zionsville, Rev. C. Davies Reed said he’s delighted to be a part of such a celebration.

“What a great ride,” he said. “I have never met a group of folks who are more on-fire and ready to work for the Lord. I know that sounds corny, but it’s true. The people of this parish are not afraid to take on a project and get into it. The fact that the building has been built in phases shows that they have a realistic approach to growth, over building and putting the place in debt. We need more space even now, and I expect that we will need to have a capital campaign soon to expand our education space, and I expect that the membership will become excited and make it happen.”

Probably of most importance over the last 50 years are the outreach programs that the church has led for locals and those in other states and countries, which Reed said is “number one.”

Earlier this year, the church received a matching grant of $30,000 from the Center for Congregations in support of outreach programs for children in grades six through 12.

“While most grants that the Center for Congregations gives are not competitive, this one was,” Reed said. “It is called the Youth Ministry Grant Initiative program. Since it was competitive, I would say it was prestigious for us to have received.”

As the church looks ahead towards the next 50 years, Reed said it will be important for the church to keep growing and not become complaisant.

“We need to keep praying that God will show us what our next project is in service to others. We need to pray that God will show us how to pray for ourselves and others. We need to invite others into a relationship with Jesus Christ, a very big challenge for most Christians. Many sound like kooks when they share their faith. Prayer is the key to all of this, so the greatest challenge is to create space for conversations with God. Space without electronics, space without earbuds, space without all the noise of the world and the intrusions that have become so habitualized in our contemporary culture,” he said.

Sun. Oct. 5 — 10 a.m., the Feast of St. Francis of Assisi special worship service and coffee hour to follow. Open to the public

Sun. Oct. 5 – 4 to 6 p.m., annual Pet Fair and Blessing held in conjunction with Christ Church Lutheran on the St. Francis lawn. The blessing is scheduled at 5:15 p.m. Open to members of the community and their pets.

The roots of St. Francis In-the-Fields Episcopal Church date back to July 10, 1964 when the Episcopal Diocese of Indianapolis granted the petition of 11 families who wanted to start a mission in the Zionsville area. Their reason was the fact that the nearest Episcopal church from Zionsville was at least 10 miles away.

(The list of petitioners is available upon request. Among the names are Martha and Russell Fortune Jr., longtime benefactors until their death.)

The first meetings of the Zionsville Episcopal Mission with a part-time vicar were held in the old American Legion hall in Zionsville.

In 1965, the women of the church organized the first of six successful house tours to raise money to help purchase land northwest of the village. A small house on the property was remodeled to serve as a chapel and the mission was renamed St. Francis In-the-Fields. Construction of the Nave of the church began in 1968 and was first used on Palm Sunday in 1969. Five years later a building with classrooms, nursery, and kitchen was constructed and the following year, the two buildings were connected.

As Zionsville grew, so did the church. The first full-time vicar was hired in 1979. In 1984, the construction of another wing with offices and parish hall was completed.  During this time, St. Francis was still a mission congregation receiving financial support from the diocese. In 1994, the church having met the requirement of being financially independent for three years became a parish and the then fulltime vicar – Rev. Sandra Michels – became fulltime rector.

In 1998, one more construction project was completed with enlarged reception area, enhanced educational space, a large parish hall, columbarium and gardens. It is the building which can be seen today at 1525 Mulberry Street.

The Rev. C. Davies Reed is rector of St. Francis which has two services on Sundays, Christian formation programs for children, youth and adults and an active music program. Annual events include the fund-raising pumpkin patch, mission trips and a strong outreach program which benefits people in need not only here but worldwide. (A list of outreach programs is attached.)

A gala 50th Celebration Weekend is scheduled Oct. 4 and 5.

In addition to the annual mission trips, St. Francis’ year-to-year outreach projects include:

United Thank Offering – Parishioners receive a little blue box twice a year and are encouraged to drop a coin in it each time they are thankful. The boxes are collected in May and November and the money sent to the Episcopal Church, USA. Moneys are used to fund grants for the needs of mission projects worldwide.

St. Francis Gardens – The community garden has 68 plots which are rented to gardeners with the understanding each will give 10 percent of its produce to the food pantries at the Lebanon Caring Center and the Zionsville Presbyterian Church. St. Francis volunteers tend four additional plots. All of their harvest is donated to the food pantries.

Food drives – During the non-growing season, canned and dry goods are collected and given to the Zionsville Presbyterian Church food pantry.

Thanksgiving Pies – In November, parishioners bake or buy pumpkin pies which are included in Thanksgiving dinners distributed by the Caring Center in Lebanon to needy families in the area.

Operation Christmas Child – Children at St. Francis fill wrapped shoe boxes with small toys, school supplies and toiletries as well as write notes to the future recipients. Boxes are distributed to children throughout the world through the Samaritan’s Purse organization.

Angel Tree – A Christmas tree is placed in the church and decorated with paper angels with either the Caring Center or Dayspring listed on the backs. Parishioners select an ornament and in return, provide a gift card for the organization listed. The gift cards are then distributed by the organizations.

In addition to the annual outreach projects, St. Francis responds to one-time needs. Recent ones have included:

The Crockpot Drive for the Lebanon Caring Center’s cooking program.

The crafts/school supplies drive for the Boys and Girls Club

Fill Up the Truck food drive for the Caring Center

The Pajama Drive for Wheeler Mission.