You are at:Home»Current in Carmel»Carmel Community»Beef & Boards: Where the wind comes sweepin’ down 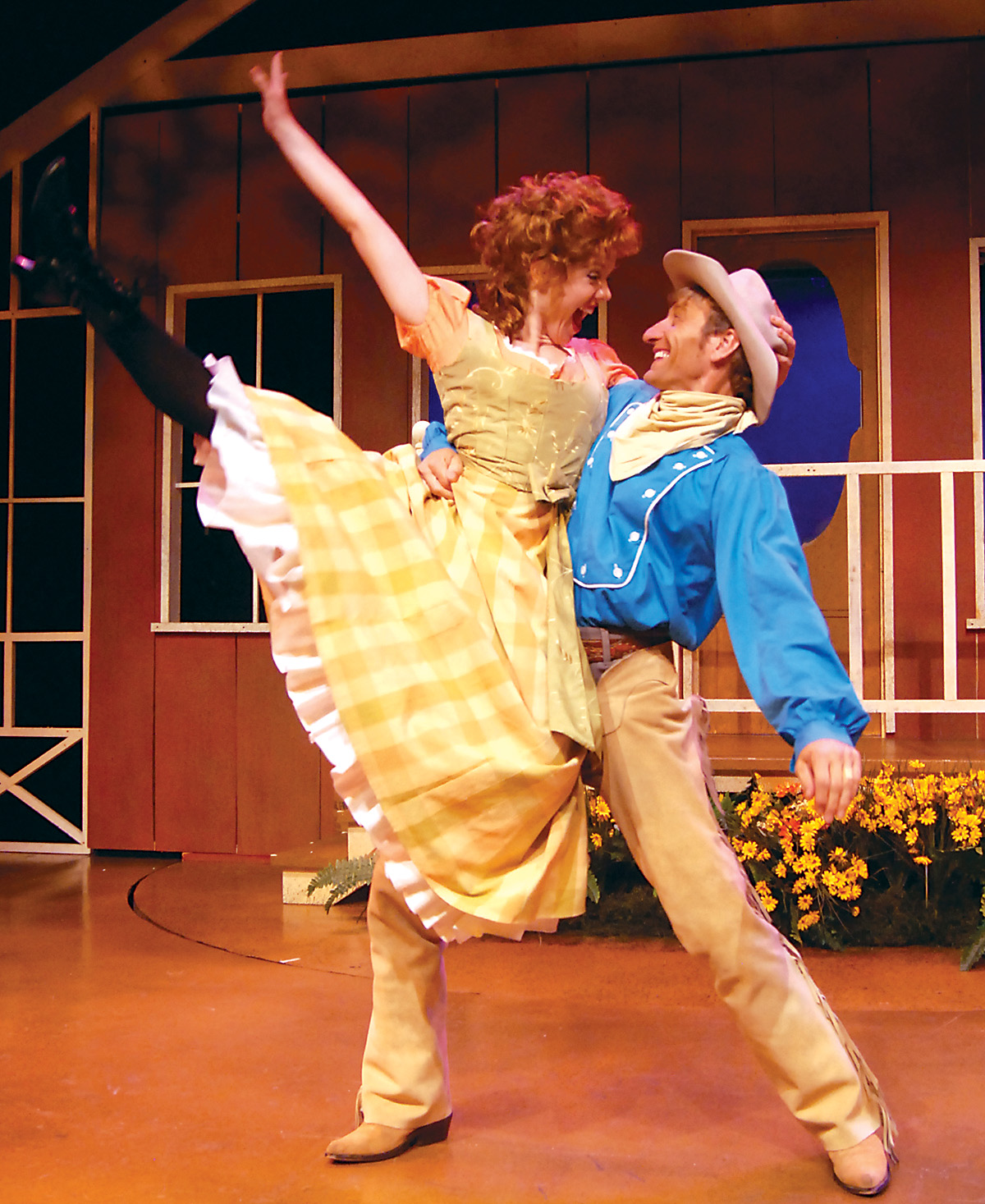 “Oklahoma!,” the very first collaboration of Richard Rodgers and Oscar Hammerstein II, is a high-spirited rivalry between local farmers and cowboys in Western Indian territory at the turn of the century. Performances at Beef & Boards run Aug. 21 through Oct. 5. (Submitted photo)

The first show in the historic collaboration of Richard Rodgers and Oscar Hammerstein II was also the first for an enduring Indianapolis partnership.

Doug Stark and his business partner for many years, Bob Zehr, took ownership of Beef & Boards Dinner Theatre in 1980 and made their mark here with “Oklahoma!”

That 1943 stage adaptation of the novel “Green Grow the Lilacs” launched the Rodgers and Hammerstein brand on Broadway and was also a milestone that established the “book musical” as a favorite American form of entertainment.

On Aug. 21, the seventh B&B production of the perpetual hit show will take the stage at the landmark showplace on Indianapolis’ northwest side. It is being directed by Stark’s daughter, Elizabeth.

Stark, now sole proprietor, recalled in an interview how the B&B course here was set by his and Zehr’s decision to revive the show with which they had concluded three years of doing business in suburban Louisville.

“We took over the theater just after Thanksgiving,” Stark said. The previous owner, a national dinner-theater chain based in Dallas, Texas, had “1776” onstage, with “a very, very large cast” that was tiring after a 40-week engagement in the chain’s several other regional theaters.

“We replaced that show with ‘Oklahoma!,’” Stark said. “It was not the best of Christmas shows, but we had a really fun cast. We were able to mount it fairly quickly because we had done it in Simpsonville. We could concentrate on selling tickets and getting more audience in here.”

In that era, dinner theaters were a fading fad nationwide. The tendency, Stark said, was to use a “star system,” staging often “substandard shows that wouldn’t have been produced anyplace else” with a household name leading the cast.

Beef & Boards has always mounted its own productions, concentrating on musicals, and featuring stars only to the extent that some of its veterans have become stars to loyal patrons over the past 35 seasons. The operation has bucked the tendency of dinner theaters to fade in a marketplace favoring separation of food and entertainment.

What makes “Oklahoma!” a surefire hit on the B&B schedule? “First, it’s because our audience can relate to it,” starting with the man at the top: “I’m third-generation off the farm,” Stark said. “Something about that kind of story is easily relatable, even with me. I’ve seen surreys, and hawks doing lazy circles in the sky,” he added alluding to two of the show’s hit songs.

Furthermore, “you don’t have to think a lot in ‘Oklahoma!,” and it’s got something for everyone: “You have your love interest, your funny people, your crotchety old people,” he said. “And that show was back in the day where a lot of your Top 10 popular songs came from Broadway.”

Plus, even the dark side – the threat the lovelorn cowhand Jud Fry poses to the romance of Laurey and Curly – shows some sympathy for the doomed Jud.

“They’re not trying to make any huge point with it, except ‘this happened and we have to get through it’ and life can go on,” he said.

And the peppy title song is reprised at the very end, “everybody is brought back up (in mood),” Stark said. “It’s a show that continues to sell really well to our audience.”

Stark also takes pride in the working atmosphere he creates at Beef & Boards. This cast is particularly rich in newcomers to the theater, including Eric Morris as Curly and Grace Ann Field as Laurey. Others in B&B debuts are Daniel S. Hines, Brian Sutow, Mary-Elizabeth Milton, Jordan Moody, and ensemble members Leah DeWalt and Devan Mathias.

“It’s important to have newcomers and have them blend with the people who have already been here,” said Stark, mentioning Licia Watson, who will have just finished reprising her role as Vivian Snustad in the “Church Basement Ladies” series.

“Once we get them involved, we hope they will be us for a long time,” he said. “We kind of try to have a very, very ‘human’ theater. It’s not like ‘You actors are here to work for us, and you can do this and you can’t do that.’  If you get them to a comfort level where they enjoy working here, you can pull that little extra 10 percent out of them onstage.”

The payoff is evident in audience response, too, Stark believes. And that positive feeling helps to ensure long-term business success. “If someone is having a good time doing what they’re doing,” he said, “it makes you feel so much better watching the show.”