You are at:Home»Current in Westfield»Lions club recognizes members, officers

Club meetings are currently being held at the Westfield Friends Church on Union Street. Since the flood in April, the club has not been able to rent the building to groups and citizens to use the facility for meetings, parties and family gatherings. 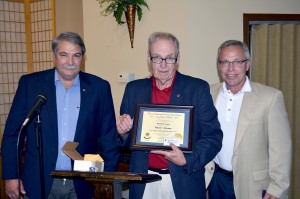 The Westfield Lions Club awarded Bob Benson with the Life Member Award from Lions Club International. This is one of the highest honors available for Lions Club members. Benson is the first Westfield Lion to receive this award – and the club was chartered in 1930. Officials said Benson, a 45-year member, has been an integral part of the long-term success of the club. 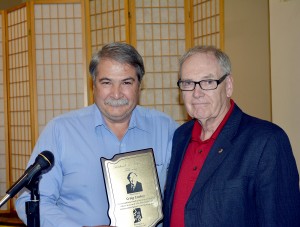 Bob Benson, chairman of the Westfield Lions Club board of directors, presented the Richard T. Miyamoto Fellowship Award to immediate past president Craig Cooley. The Miyamoto Award recognizes Lions who have made significant contributions to their clubs. In the case of Cooley, he was the 2013-14 club president and presided over a year that saw positive membership growth, the induction of the first female members to the local club, nationally and state recognized award-winning club performance and the reconstruction of the organization’s clubhouse after it was severely damaged by the April flood.