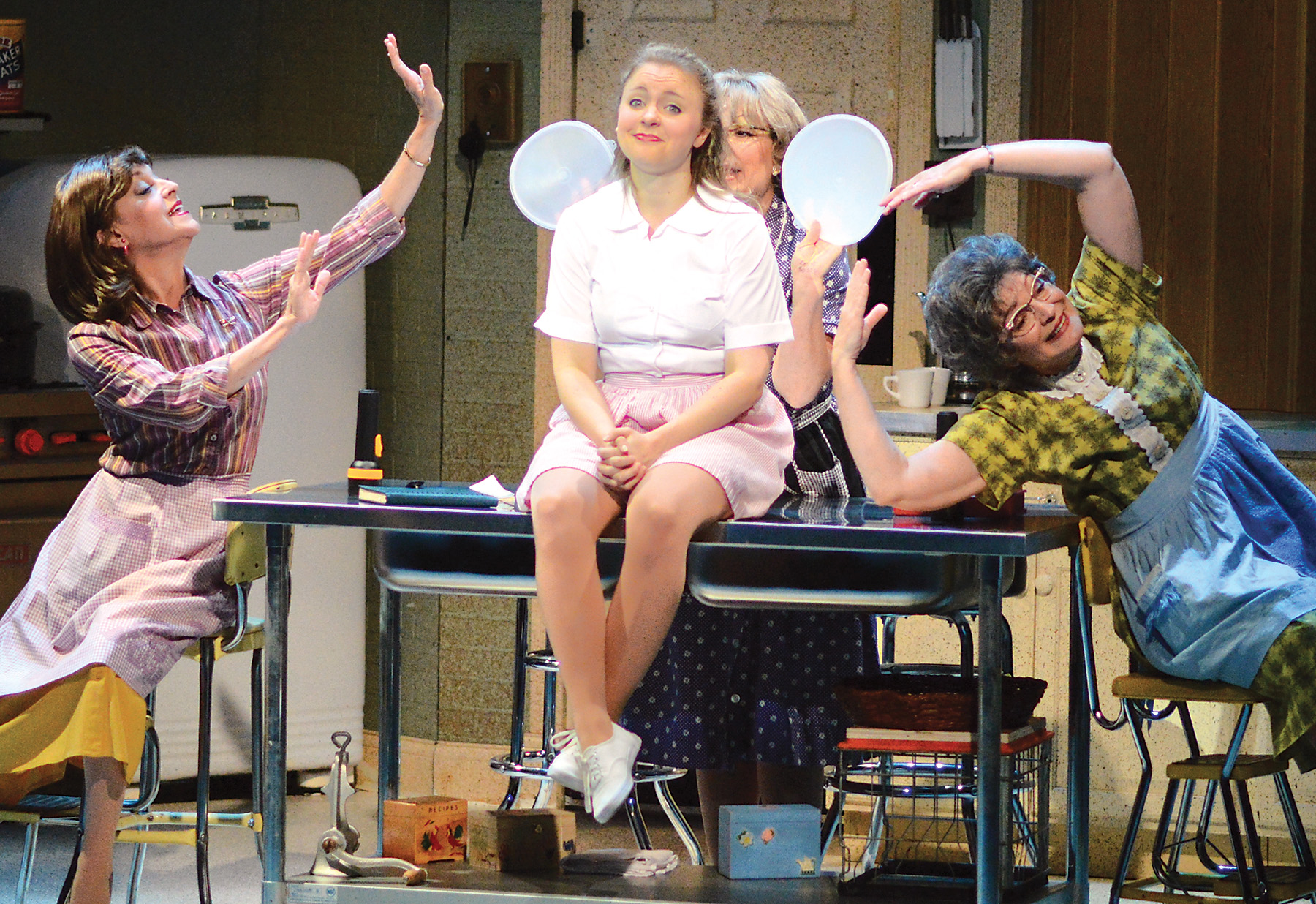 Beverly (Hillary Smith), center, dreams about how great everything will be “After I’m Confirmed” in the all-new Church Basement Ladies show: A Mighty Fortress is Our. (Submitted photo)

“Church Basement Ladies,” a series of musical comedies that does for rural Minnesota Lutheran churchwomen what “Nunsense” did for urban Catholic nuns, has given a professional boost to a young actress who grew up in Carmel.

Hillary Smith, 24, plays Beverly, a 15-year-old confirmand helping her mother and two older women prepare a Reformation Sunday meal in the basement kitchen of a church to which all are devoted.

Smith says the characters’ bond goes beyond that. “Our director [Curt Wollan] said that the heart of the show is the characters’ love for each other. There’s joke after joke and laugh after laugh,” she said. “But what people fall in love with about the shows is the five of them [counting Pastor Gunderson]are each other’s family.”

The actress, a graduate of Cathedral High School who went on to earn a bachelor of fine arts degree at Florida State University, drew on her offstage experience to indicate how this resonates with audiences.  “Growing up we all have our versions of that – besides our birth families,” Smith said.  “It’s about that group that helps shape the person you’re becoming. They are characters you can relate to.”

Smith is returning to the series after a year off, joining a cast mostly of actors reprising their roles from earlier “Church Basement Ladies” productions. The veterans are Licia Watson, Karen Pappas and Eddie Curry. Carrie SaLoutos is the newcomer.

“It’s a really good experience,” Smith said. “I never played the same role twice. I know how the show works, and that really helps. I can explore my character more. I know where we left off before, and it’s nice working with the same people.”

“A Mighty Fortress,” like its predecssors, involves handling a lot of props – it takes place in a busy kitchen, after all. And familiarity with those items has helped Smith as well: “It’s difficult to juggle all of them the first time around,” she said.

Since her graduation as a musical-theater major, Beef & Boards “Church Basement Ladies” gigs (in 2012 and this year) since graduation stand out in Smith’s short resume.

“I’ve been very lucky so far,” she said of her career. “I’ve been working very consistently.”

She has appeared in summer seasons at Wagon Wheel Theater in northern Indiana and Fireside Theater in Wisconsin; locally she’s played a couple of roles in Indiana Repertory Theatre’s annual production of “A Christmas Carol.”

Now based in New York, Smith dreams of being on Broadway someday, but basing herself there is also wise from the standpoint of doing auditions for regional theaters as well.

The actress’ mother, Kelly Butler Smith, is head of young adult theater at Civic Theatre. When Hillary was growing up, her mother ran a dance studio and dance was the first “leg” of the three-legged stool that musical-theater specialists must rely on. The other two – acting and singing – were developed during her education.

“We’ve always shared our love for theater,” she says of her family, who along with local friends have been in audiences for “A Mighty Fortress,” which opened July 5. “I’m really lucky it’s been part of my life since I was a little girl.”

What: “A Mighty Fortress Is Our Basement”