You are at:Home»Current in Carmel»Carmel Community»Brainard meets with Obama to discuss climate change 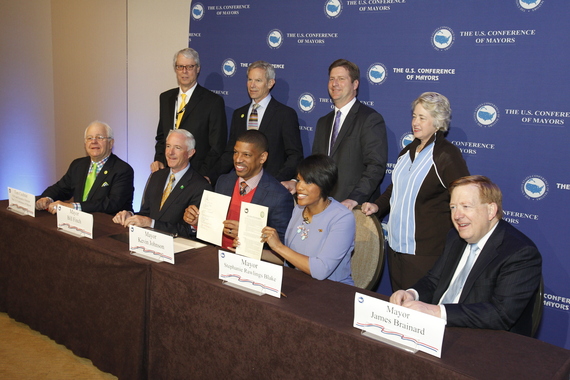 It’s not every day that the President Obama asks for your opinion on an issue. Especially if you’re a Republican.

But Carmel Mayor James Brainard has been working with the White House on a special task force dealing with climate change. He recently traveled to Washington, D.C., to give his opinions on a variety of issues relating to the environment – mostly transportation – and Obama released the recommendations on July 16.

Brainard has made headlines for his support of the environment, including interviews with Bloomberg and The Huffington Post.

“The impacts of climate change are very far-reaching,” he said, “and whether you talk about carbon or not, everybody should want to drink clean water and breathe clean air.”

Carmel’s mayor was seen as a transportation expert partly because of his support of roundabouts. It’s believed that because cars don’t stop as much and idle at intersections, that there could be fewer exhaust fumes spewing into the air.

Obama wanted the opinion of municipal leaders because he believes climate change could impact city infrastructures. For coastal towns, hurricanes and rising sea water could be a real threat.

Brainard said he believes it is possible that climate change could play a role in issues such as flooding on Emerson Road or the potholes caused by the never-ending winter.

But others, such as City Councilor Rick Sharp, disagree with that assertion.

“It seems like a convenient excuse for not having enough money for street repairs,” he said.

Sharp, who is considering a run for mayor, took to his Facebook campaign page to criticize Brainard’s position of climate change when the Huffington Post article came out. He believes the mayor is out of step with the rest of the Republican Party on this issue.

“I am not a climate change denier, but I think particularly some of Obama’s policies are too draconian and we should be taking a more measured approach and get to the change incrementally,” he said.

But Brainard feels that the Republican Party traditionally has been the party that protects the environment – even more so than the Democrats. He said he believes when Al Gore made global warming one of his top issues during his presidential elections it caused some Republicans to switch on the issue.

“It was Teddy Roosevelt, a Republican, who set aside millions of acres of federal park land,” he said. “It was President Richard Nixon who signed the law establishing the Environmental Protection Agency. It was Earth Day. The Clean Water Drinking Act. The Endangered Species Act. All signed during the Nixon Administration. If any party has a claim historically to environmentalism it was the Republican Party. I point out that conserve is the root of conservative.”