You are at:Home»Current in Westfield»U.S. 31 landmarks vote delayed indefinitely 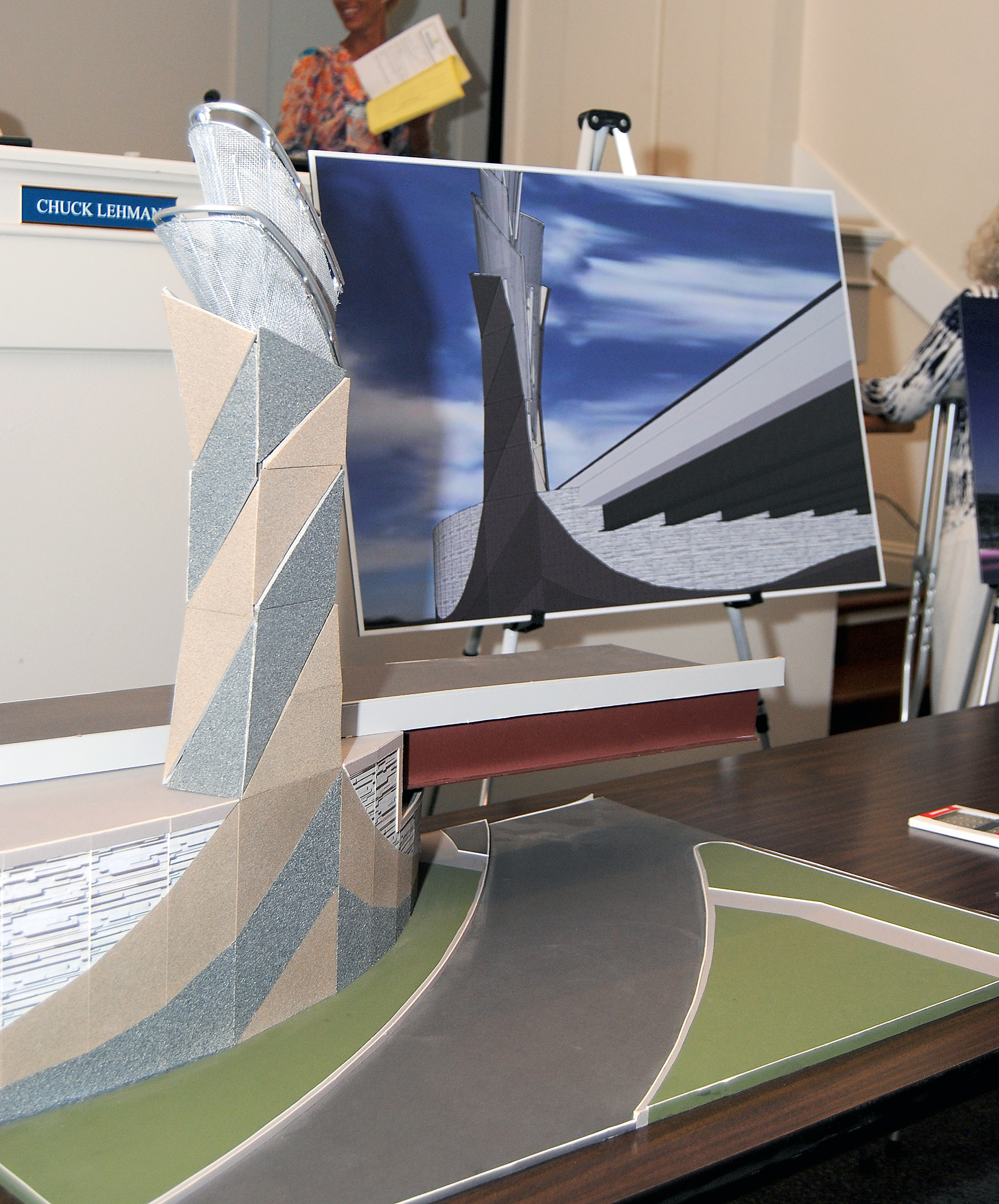 A model of the proposed Westfield Towers was on display along with renderings of the project during the Westfield City Council meeting on June 23. Voting on the project was scheduled to take place on July 14 before it was tabled indefinitely by the council. (Photo by Robert Herrington)

On July 14, the Westfield City Council was expected to vote on the proposed U.S. 31-Ind. 32 landmarks – also known as the “Westfield Towers” – but prior to the meeting the ordinance was tabled to a future time.

“It’s a very lightening rod item. I want to feel better about what the overall community feels,” Mayor Andy Cook said. “People agree there should be something.”

Cook said there is no timetable for the vote.

“No time right now,” he said. “We want to make sure it’s the right thing to do.”

A public hearing on the project was held at the June 23 Westfield City Council meeting. Eighteen members from the public spoke – five were against, three were neutral, and the rest were in favor. Proponents said the project will drive economic development and tie together two major city projects – the Grand Park Sports Complex west of U.S. 31 and Grand Junction Park and Plaza downtown.

Since the meeting, Cook said there has not been swelling support for or against the project.

“Nothing overwhelming either way,” he said.

If the vote had been held after the June 23 public hearing, it would have passed 4-2. Councilor Bob Smith was not in attendance at the meeting.

“Yes, we had the votes but we want to make sure it’s the right thing to do,” Cook said.

Cook said some of the feedback he’s heard about the project is that it is “too grand.” He said he has found that most of those with negative views don’t understand the background, intention or architecture interpretation of the project.

“People haven’t heard the whole story,” he said. “When people hear the story they tend to change their mind.”

“I can usually get them to a point when they start understanding what we’re trying to accomplish. It is a good thing for the city,” Council President Jim Ake said.

Ake said Westfield is fiscally strong and provides top notch public safety with a lean work force. He added that the city has established a laundry list of needed improvements and can complete them all and construct the towers.

“We are paving streets and putting in roundabouts. We need to make the world aware of what we have and we have the funds to do it,” Ake said. “Where are we not meeting the needs of the community? Tell me because I’d like to know.”

“I wouldn’t be doing this if we couldn’t afford it,” Cook said, adding the project will use utility funds and not taxpayer dollars. “It’s intended for economic development.”

The 100-foot towers will be created with precast concrete and stainless steel. The top and joints will be illuminated with digitally controlled LED lights, which can change colors depending on the season or special events.

Mark Beebe of architecture engineering firm RQAW Inc. said the towers include curves which add color and texture and stainless steel and painted steel at the top to provide a new look depending on sunshine and viewing point.

“It will be built with no maintenance in mind and to last a hundred years,” he said. “Single forms tended to make the stronger impact. Color and lights are for dramatic effect.”

As INDOT work at the intersection, it is installing the foundations for the towers at a price of $300,000 each tower. Officials said this cost is included in INDOT’s $350 million highway overhaul. Cook said the city has the next year of construction to decide soon whether to proceed with the project.