You are at:Home»Current in Westfield»Kroger proposes new fuel station, expansion 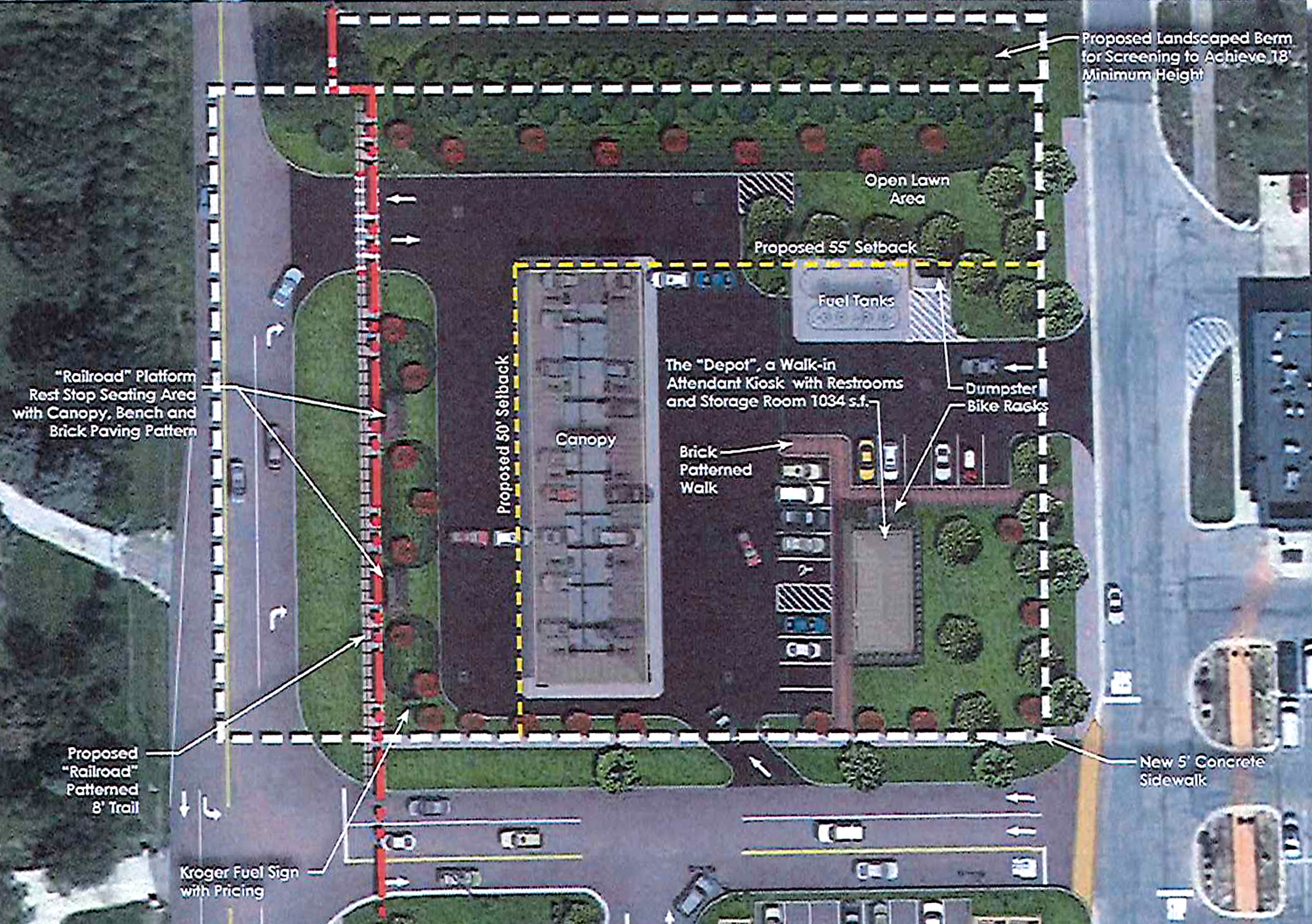 The Spring Mill Station Economic Development Area of 161st Street and Spring Mill Road may receive its first railroad themed architecture with a proposed redesign and expansion of Kroger.

“The existing fuel center is not serving the needs of the community,” he said. “It will be a larger, better, more open fueling station with better circulation.”

Salma said the proposal includes a new 10-gas pump center that would be built north of the current four-pump fuel station, which will be demolished.

Engineer Paula Gardner said the building’s 13,000 square feet expansion would occur on the north side of the grocery. Plans also call for an outdoor patio area for dining, new bike racks and landscaping and a railroad-themed mural.

A total area of 1.79 acres will be under construction. Other items included with this project include all new utilities which will incorporate underground stormwater detention and stormwater quality, landscaping and the addition of a new curb cut along Spring Mill Road.

The proposal will have a public hearing Aug. 8 at the Westfield Advisory Plan Commission meeting. It is scheduled to return to the city council in September.

Other items of business at the meeting included:

What it means: The Pedcor Invesments and Paul Estridge Group project for Oak Park was originally met with overwhelming objection from neighbors but in the three months since then, the two sides have and come to a consensus for the 35.26 acres project at 161st Street and Oak Road. The neighbors’ objections were the result of three items: a second permanent entrance on Oak Road which will be used for construction traffic, larger lot sizes and having a voice in the appearance of the homes to be built. All of the disputes were settled and the neighborhood backed the rezoning.

What’s next? The rezone was unanimously approved.

What it means: Sundown Gardens requested a change in zoning from Agricultural-Single Family-1 to the “Garden Market” development that would allow for a mixed-use agritourism, garden and lawn center, nursery and commercial development on approximately 16 acres at the southwest corner of the intersection of 186th Street and Spring Mill Road.

What’s next? The rezone was unanimously approved.

What happened: Annexation of Kalorama Park

What it means: The area, approximately 10 acres located northwest of the intersection of 171st Street and Oak Road, is adjacent to the existing city limits along the northern, southern and western boundaries.

What’s next? The annexation was unanimously approved.

What happened: Annexation of the Lakes of Westfield

What it means: The area, approximately 140 acres generally located between Shady Nook Road and Grassy Branch Road, south of 186th Street, is adjacent to the existing city limits along the eastern and southern boundaries.

What’s next? The annexation will be available for adoption consideration on Aug. 11.