You are at:Home»Current in Carmel»Carmel Community»Carmel runner races past fears 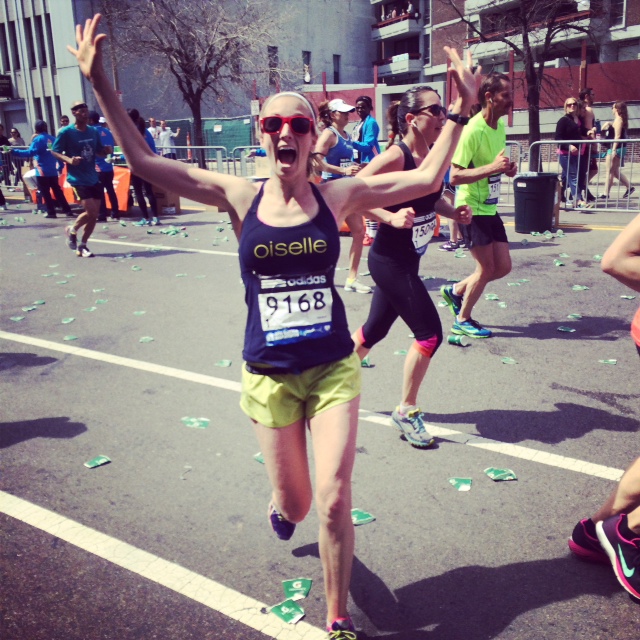 Go face your fear. Do something powerful.

Those are the words that empowered Carmel Road Racing Group Media Director and Coach Lindsey Hein as she faced one of the most critical health-related decisions of her life.

She found courage and calming brought on from the rush of endorphins through her natural drug of choice – the sport of running.

“There is nothing that is going to make my day better than getting my run in,” Hein said. “I’ve always struggled with anxiety and fear. Fear for health reasons and other things, too. I’ve always been an anxious flyer, running has always given me an outlet for those kind of things. I don’t know what I’d do if I didn’t run. I would definitely probably be on an antidepressant, I’m sure.”

Hein, a marathon runner and running enthusiast for the past fifteen years, recently made headlines by winning a cover model contest for Women’s Running magazine with her story on “finding your strong.”

Hein used her half-Ironman training sessions to give her the courage to be tested for the BRCA2 gene mutation attributed with causing breast and ovarian cancer that runs in her family. The test came back positive, putting Hein at an 86 percent chance of getting breast cancer in her lifetime.

Suffering from anxiety most of her life, this was one worry Hein decided to eliminate – so she had a prophylactic double mastectomy in October 2013 and reconstructive surgery in January

This spring she ran her second Boston Marathon.

“I’ve just had a lot of support here,” Hein said on winning the contest with the help of local voters. “It’s really neat, too, because Indianapolis is known for not being a very fit city, and we always make the list of top worst cities to live in for health. So it’s kind of cool that someone in Indianapolis won a contest like this. I’m really proud to represent Indianapolis because I love the city.”

Hein’s enthusiasm for running is infectious. On her blog, outforaruntraining.com, Hein candidly discusses her struggle with anxiety, her preventative surgery and the healing powers of running.

“Once you’ve experienced what the finish line feels like or what it feels like when you are done with a good hard run, that’s what you have to focus on when it’s hard to get your shoes on and get out the door. Focus on what the end result is going to be and how it’s going to make you feel and how much better you will be feeling.”

She also recognizes that running may not be for everyone.

“I need to get my sweat on to feel better. Running is not for everybody. I encourage people to find what their niche is and make it happen,” she said. “Whatever makes you feel better – maybe it’s painting – go do that.”

Hein is Head Coach for the Carmel Road Racing Group Women’s Fall Training Program, a 15-week series of marathon training sessions for women of all ages and running or walking abilities beginning July 24.