You are at:Home»Current in Zionsville»Leaders discuss heroin growth 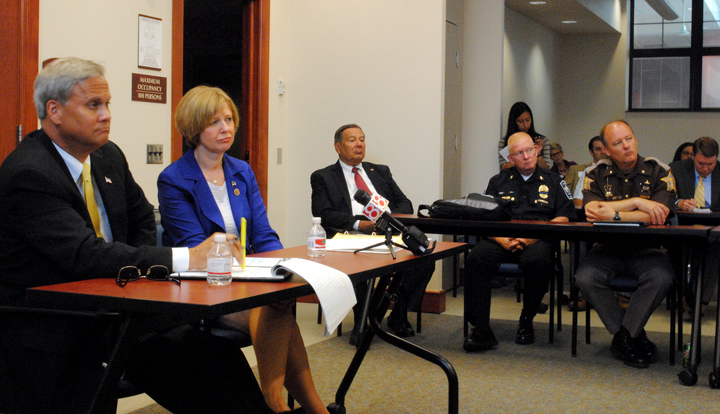 Last week, elected officials from across Hamilton and Boone Counties and the state gathered together at Noblesville City Hall to discuss a growing issue in the community. U.S. Rep. Susan Brooks (R-Ind.) and State Sen. Jim Merritt brought together those on the frontlines of the Indiana drug war, in order to discuss the state’s increased heroin epidemic.

“If society doesn’t see this as a problem they’re in for a huge wakeup call very soon,” Hamilton Country Sheriff Mark Bowen said.

Brooks began the discussion by telling the panel, “I want to learn from you all what you are seeing,” acknowledging that heroin is “not just a big city problem.”

The talk about the gateway to heroin is easy to attain, and most of the time is sitting in young people’s homes. Abuse of different prescription medicines is often the beginning of heroin addiction. In a study done by the Substance Abuse and Mental Health Services Administration, 81 percent of heroin users started with prescriptions. The pharmacists on the panel noted that they have seen an increase in pharmacy thefts.

The fear is that dealers are getting young people hooked on prescription drugs and then turning them to heroin when their prescription habit gets too expensive. Madison County Prosecutor Rodney Cummings said that prison sentence times, a maximum of six years for these dealers, is too short to deter them from the drugs.

“The answer from the state is ‘put less people in prison,’” Cummings said. “The federal government could help out significantly.”

Indianapolis Police Chief Rick Hite, who said he has seen this problem grow, also said, “We have to look at the root causes.”

Catching dealers and increasing their penalties as well as detoxing and rehabbing users is the first step, but it seems to be easier said than done, and it all takes money. Lack of federal funds in the different departments combatting this crisis was the biggest grievance.

“We’re going to go back and see what we should be focusing on,” Brooks said in closing, hoping that the meeting would bring awareness in the community.