You are at:Home»Current in Carmel»Carmel Cover Stories»Carmel City Council could tackle flooding issue

On a quiet street in downtown Carmel populated with modest ranch houses, there is a revolution brewing.

Residents of Emerson Road have for years watched as their street flooded during heavy rains until the point that it becomes impassable.

One person even posted a sign that reads, “Idle zone, no wake” – the type of sign commonly aimed at boaters in harbors and bays.

“This situation is beyond ridiculous for the people who have lived here and have been waiting on a solution for years,” said Emerson Road Resident Desra Simons. “This situation has been an ongoing problem since long before we moved into the neighborhood 10½ years ago, and we are the new kids on the block.”

And for years residents said they have complained to city workers and elected officials about the problem needing to be fixed.

“I have e-mails from back to 2011 where the city has tried to put a band-aid on the problem, but has never solved the problem,” Emerson Road Resident Charlie Demler said. 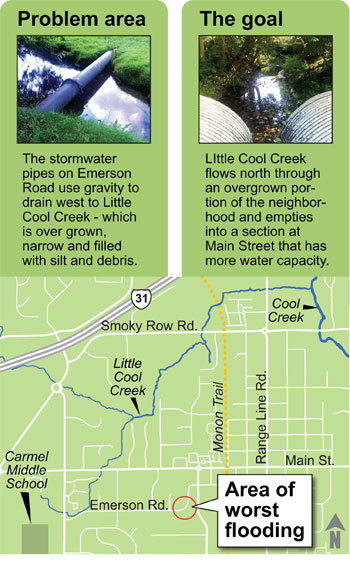 But now City Council President Eric Seidensticker has said that he will consider using the city’s rainy day funds to repair the stormwater situation on Emerson Road and then hopefully replenish the funds from a future stormwater utility.

“This is truly an emergency situation because, to date and although the mayor claims that there is a solution that is ready, nothing has been done to this point,” he said. “I will be bringing business to the council to appropriate money from the rainy day fund to fix the infrastructure on Emerson to resolve the flooding issue.”

But not everyone is convinced.

“At this point I’ll believe it when I see it, though,” Demler said.

Residents on Emerson Road said that in the past year the city had used a large vacuum truck to remove debris from the stormwater lines, replaced stormwater inlets and made some curb improvements – but those have not fixed the problem.

The stormwater lines on Emerson Road flow west toward Guilford Road using gravity and drain directly into Little Cool Creek which flows north and eventually empties in Cool Creek. It’s a common approach to drainage that makes use of existing waterways within each watershed.

But the section of Little Cool Creek along Emerson Road doesn’t have the water capacity it once did. Even to the casual observer it’s filled with sediment and debris, with overgrown banks so shallow that water would easily spill over during a heavy rain.

And the outfall from Emerson Road’s drains is blocked when it’s submerged under the creek.

Anyone who has seen the creek flood just south of the Dairy Queen on Range Line Road knows there isn’t much capacity even in the deeper portions downstream.

So to prevent the Emerson Road drains from backing up with nowhere to deposit stormwater, the city would likely need to increase the capacity of Little Cool Creek through dredging and removing overgrowth, create some upstream detention areas and possibly replace some culverts in surrounding areas.

It’s issues exactly like this that prompted some members of the city council in Spetember to propose creating a stormwater utility for the city that would raise money to fund infrastructure improvements by charging all households in Carmel a monthly $4.95 stormwater fee and a pro-rated monthly fee to businesses.

That idea has been held up as councilors debated the most equitable way to create the utility, but the last sticking point appears to hinge on who will control the utility’s revenues.

Councilor Luci Snyder has been adamant that the stormwater revenue only be used for stormwater improvements. She wants that specifically written into any ordinance the city passes and she wants council oversight of the funds because she said she thinks that Carmel Mayor Jim Brainard would prefer the utility be overseen by the city’s Board of Public Works – an entity where he appoints the board members.

Snyder said the council is considering hiring independent legal counsel to ensure it gets the desired outcome.

But all of that means little to frustrated Emerson Road residents who said they are tired of the politics and that they wanted their drains fixed yesterday.

“We are a long way from a true fix and there are still lots of places where the process can break down along the way,” Simons said. “As I told Mr. Seidensticker, I will believe it when I see them break ground in front of our house. Until then, I plan to be their worst nightmare.”