You are at:Home»Current in Carmel»Animal boarding facility could replace former Lotus Garden building in Carmel 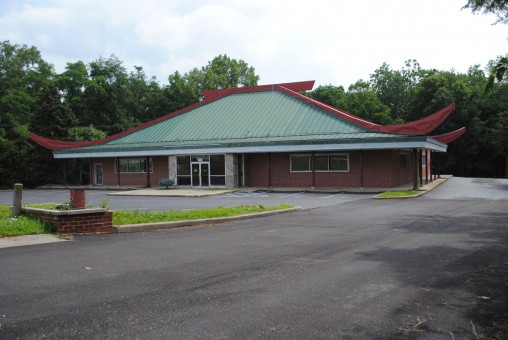 The dilapidated Lotus Garden building could get a facelift and a new dog park if Companion Animal Medical Center is able to secure its purchase and the city approves its plans. (Staff photo)

For many Carmel residents, finding a good place to board pets during vacations or holidays can often be a challenge that involves long drives to other communities.

Companion Animal Medical Center has recognized the need and is looking for a place to expand its current operations. And if everything goes according to plan, that could mean breathing new life into the former Lotus Garden building that sits just east of the U.S. 31 overpass of Range Line Road.

The Lotus Garden was a Carmel landmark, known for its distinctive roof. But it now sits rotting – its roof falling apart, its walls gnawed through by animals and its walls covered in racist graffiti.

Companion Animal Medical Center CEO Hal Bond said plans are in the works for his company to purchase the former Lotus Garden restaurant building and that construction on remodeling the building could begin as soon as this fall to be ready for the holiday season.

Although the roof would likely loose its Asian flair and be replaced with asphalt shingles, he said.

Companion Animal Medical Center is Carmel’s only 24-hour pet hospital and its existing facilities would remain open if it remodels the Lotus Garden building. The new facility would primarily focus on doggy day care and boarding because they have currently run out of space, Bond said.

“We have a waiting list for next Christmas,” Bond said, noting the new facility would give his company three times its current boarding capacity.

That demand has led the company to grow from 17 to 48 employees in just the past two years.

“We’d like to thank Carmel residents for supporting our growth,” he said. “We have nice facilities without a high price. It’s for everybody.”

He even said the company could build a dog park located on the south end of the property’s parking lot, but that likely wouldn’t be open until 2015.

Bond said that the new boarding facility would begin booking stays as soon as construction begins.

For more information about the new dog park call 844-0049 or email info@myindyvet.com.