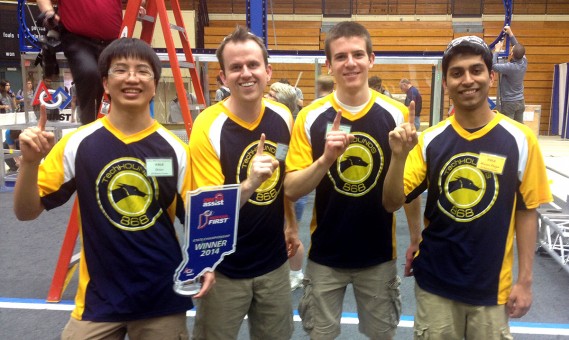 The Indiana Pacers’ Paul George probably doesn’t have much to worry about at the moment, but someday even his job might be replaced by a robot.

Or so it might have seemed in May at Indiana’s FIRST (For Inspiration and Recognition of Science and Technology) Robotics Competition – essentially the state finals for high school robotics teams.

It was here that teams of robots competed to pass, shoot and defend in an effort to score points that was not dissimilar to a game of basketball.

Going into the competition the TechHOUNDS were ranked No. 7 in the state, but an undefeated performance helped them capture their second consecutive state title. They have won every year the title has been in existence.

The TechHOUNDS were founded in 2001 by architecture teacher David Smith, now retired, who served as the head coach until 2006. Since then, engineering teacher George Giltner has coached the approximately 100 students on the team with the help of about 30 adult mentors who strive to make engineering interesting, competitive and fun. 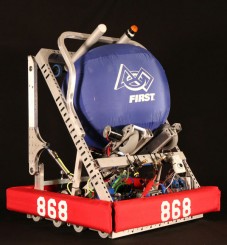 “This is a game of smarts,” Giltner said, noting that students test, engineer and fabricate their own robots.

This year’s state finals challenge was a game called “Aerial Assist,” a match that pitted robots each against each other with the goal of emphasizing teamwork and cooperative strategy to receive the most points for scoring game pieces.

The way it worked is that robots from different schools were combined into teams of three robots each and they would compete against another 3-robot team.

The goal was to collect points for picking up a 2-foot diameter ball similar to a yoga ball, passing it between team members and then shooting it into a goal. Each team had two minutes to score as many points as it could.

“It’s hard because you don’t know what your opponent’s robot is going to do,” Giltner said.

And despite the complexity of designing robots with ball-handling and shooting skills, the teams had to factor in the threat of defending robots that could move at about 18 feet per second and often had violent collisions.

“It’s a very hard hit,” Giltner said. “You have to design the robots to be robust.”

The team members each have different responsibilities, from drivers to strategists, and often times they had to act similar to a pit crew at an auto race, carrying their own tools, supplies and parts necessary to make repairs between matches.

“To see my team come together and build such an amazing robot, I’m 100 percent proud,” Giltner said. “It was amazing. I was smiling ear to ear.”

He also is proud because his robotics team is learning “real world” skills and then practically applying them.

“You can’t in my mind simulate anything better than what we do on the robotics team,” he said.

He also wants incoming Carmel High School freshmen to know that anyone is welcome to join the team, regardless of expertise.

“No one ever knows how to build a robot,” Giltner said. “We teach them.”