You are at:Home»Current in Carmel»Obituary: Teresa Marshall 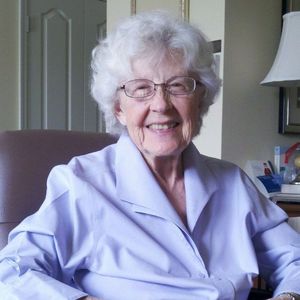 Teresa Ann Millette Marshall, 88, of Carmel, died in her home on June 6, 2014. Teresa was born August 18, 1925, in Vermillion, S.D., to a farming family. Her deafness was discovered when she was about 2-3 years old. Until the age of 7 she had no formal language. An outreach worker from the South Dakota School for the Deaf, searching the state for deaf children, found her and began Teresa’s formal education at the residential school for the Deaf in Sioux Falls, S.D. In 1946, Teresa attended Gallaudet College in Washington, D.C. as a preparatory student, then returned to South Dakota and facing a far greater challenge, attended Sioux Falls College, and with only the aid of the hearing students’ notes successfully graduated with a bachelor’s degree. While attending college, she enjoyed working as a medical technician and had a four year courtship with a deaf graphic arts teacher who would become her beloved husband of 53 years, Marvin Marshall. They moved to Faribault, Minn., where they started a family. Teresa was a stay-at-home mom while volunteering at a local hospital and acting as a Cub Scout den mother. With the youngest child starting school, the principal of the School for the Deaf, after seeing Teresa’s handling of her own children, convinced her to become a teacher. Teaching became Teresa’s true calling. Active in the deaf community, she assisted in the establishment of the Minnesota chapter of the Junior National Association of the Deaf. In 1969, the family moved to Indiana where Teresa taught various subjects in the middle school at the Indiana School for the Deaf. She worked tirelessly during this period, teaching by day and at night creating lesson plans, correcting papers, completing her master’s degree in special education at Butler University and managing her teenagers. Over the years countless numbers of former students informed us that she was one of their favorite teachers. She often said that her success with students was that she believed in them. She wanted to see each one perform to the best of their individual ability and they knew she genuinely cared about them. Teresa and Marvin retired in 1986 and focused even more energy into organizations such as the Indiana Chapter of the Registry of Interpreters of the Deaf. They greatly enjoyed traveling the world with deaf tour groups. Shortly after their fiftieth wedding anniversary, Teresa nursed her husband Marvin through his Lou Gehrig’s disease until his death in 2004. Afterwards Teresa continued to enjoy her life with her bridge group, the MCL Wednesday luncheons, the Red Hat Society, attending various deaf community events, travelling to Deaf Senior Citizen conventions, keeping in touch with her friends across the country on the videophone, visiting with her beloved relatives and proudly enjoying her grandchildren and great-grandchildren. The family expresses much gratitude to Bethany Adner and Arthur Day for their wonderful friendship and caretaking so that Teresa was able to live quite comfortably and happily in her home through her dementia and eventual decline. Teresa is survived by 6 great-grandchildren, 4 grandchildren, and her children, Liza Marshall of Rochester, N.Y., Vernon (Jean) Marshall of Phoenix, Ariz., Carlyle Marshall of Indianapolis and Bren Marshall of Indianapolis. The family will conduct a celebration of life service at Flanner and Buchanan-Broad Ripple at 2 p.m. Sept. 6. Memorial contributions may be made to the Indiana School for the Deaf.