You are at:Home»Current in Carmel»Carmel Community»Tickets still a possibility for ‘The Book of Mormon’ 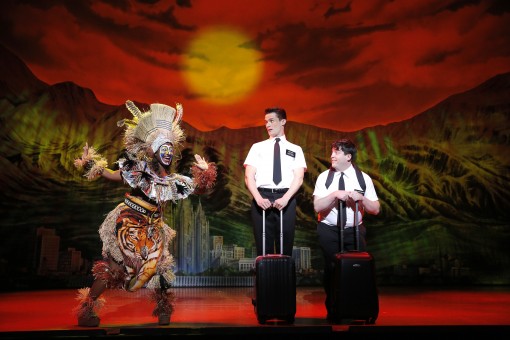 The Book of Mormon is coming to the Old National Centre June 17-22 and, while the show is almost sold out, you still have a chance at tickets through a lottery.

The musical – winner of nine Tony Awards – will make a limited number of tickets available with a pre-show lottery. Entries will be accepted at the box office starting two and a half hours before each performance. Names of winners will be drawn two hours before the show for the tickets – priced at $25.

According to director of public relations, Matthew Porter, the lottery has attracted as many as 800 entries at some performances across the country.

The Book of Mormon – which opened in 2011 – has been called one of the “filthiest” and “most offensive” shows on Broadway. Created by Matt Stone and Trey Parker – known for their animated TV show South Park – is the story of two young missionaries who go to Uganda to try to convert residents to the Mormon religion. One is an enthusiastic go-getter with a strong dedication to his faith while the other is a socially awkward, well-meaning nerd who has a tendency to embroider the truth. When they arrive in Africa, they realize it might not be as easy as they expected.

“My love for musicals comes from Rogers and Hammerstein and all the classics on VHS and the local community theatre,” Parker said. “I wanted something happy and optimistic and structured in that way and just in the same way they would do it about people living in Oklahoma or Chinese Americans in San Francisco or people in the South Pacific. It was like, this is our theme and this was our group of people and it really was let’s try and make a cool, traditional musical first and then the Mormon thing was sort of this ‘Oh, here’s the one – let’s do it about this.’”

“That aesthetic and that choice the church makes to make that kind of their public image seems to just fit with musical theatre,” Stone said. “There’s just something about their attitude that just makes it look like they’re about to burst into song.”

The Book of Mormon ● June 17 through June 22 ● Old National Centre ● 502 N. New Jersey Street in downtown Indianapolis ● Tickets start at $25; Winners of the ticket lottery must be present at the time of the drawing and entries are limited to one per person and two tickets per winner. ● For more information call (800) 982-2787 or visit www.BookofMormonTheMusical.com.