You are at:Home»Current in Fishers»A gift from the heart 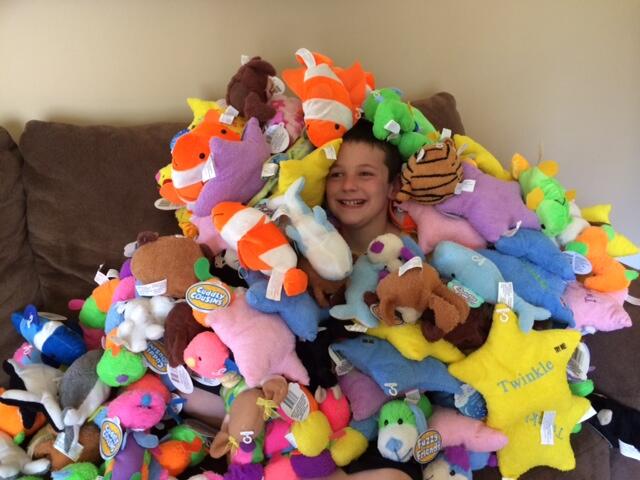 9-year-old Hudson Miles with the stuffed animals he donated to the Fishers Fire Department.

Hudson Miles is a 9½-year-old boy from Fishers who recently read in his Scholastic Newsletter about a boy his age who had donated stuffed animals to his local fire department because he had read that kids being transported by ambulance are often very afraid. The idea was that the stuffed animals would give them comfort.

Hudson told his mom that he wanted to do that too. So the family posted on their Facebook page and spread the word that if people would just donate one dollar, they would go to the dollar store and buy a stuffed animal. The family was overwhelmed when the response to the plea was $160 in donations.

Hudson and his family bought 160 stuffed animals and personally delivered them to the Fishers Fire Dept. on May 23. It’s a sweet story even if it ended there. But it doesn’t, because Hudson has Asperger Syndrome.

This kind of thoughtful, concerned act, according to Hudson’s mother, Angie Miles, is not typical of a child with Asperger’s.

“A hallmark of Asperger’s is that it is a social disease and it inhibits them from being able to consider other people’s feelings. That’s the number one marker of the condition,” she says.

Hudson is considered moderately affected by the disorder, his mother says and adds, “It’s something that certainly impacts our lives very much.”

He recently began attending Little Star Center in Carmel which is an Applied Behavior Analytics (ABA) licensed center. Miles says that it was a crisis situation that brought them to the center and it has proven to be life-changing for them.

Hudson receives 35 hours of one-on-one intense therapy per week at the center and Miles references the stuffed animal donation as an example that it is working.

“It’s just phenomenal. It just really, really touched our hearts. I think other parents of Asperger’s children would see how significant this is. Really for any child, it’s a big deal to be selfless and do selfless things, but for an Asperger’s child it’s just especially great,” she said.

The Fishers Fire Dept. was so moved by the act that it sent out a press release to media outlets in the Indianapolis area saying “The Fishers Department of Fire and Emergency Services thinks this is an amazing boy with an amazing heart for others, and celebrates that Hudson was able to define Asperger’s rather than to be defined by it. Hudson’s generous donation will keep our ambulances stocked for quite a while.”

In the meantime, Miles says her family takes things one day at a time.

“We celebrate all of his victories,” she said. “One day when he came home from Little Star, and this just sounds so benign to anyone else, but part of his progress report that day was that he had asked an adult ‘how is your day going’ which is a huge deal for him and I’m just as proud of him doing that as I am for doing this. We’re getting there one step at a time.”