You are at:Home»Current in Fishers»Boland chosen to run for state Treasurer 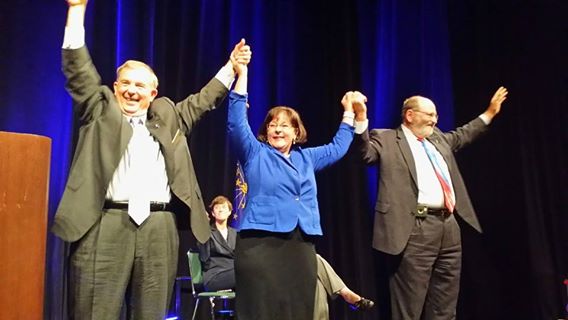 On May 31, the Indiana Democratic Party held its State Convention and officially nominated candidates for the three statewide offices that will be up for election in November. One of the candidates chosen is Mike Boland of Fishers who was selected to run for the office of State Treasurer.

Boland moved from Illinois to Fishers in 2012 to be near his children and grandchildren after retirement, but has owned property in the area since 2007. He had a 30-year career in education and was also involved in politics in Illinois on many levels including serving 16 years in the Illinois House of Representatives. During that tenure he served as the chairman of several committees including the financial institutions committee during which he says he gained lots of knowledge that gives him the qualifications necessary to be State Treasurer.

He began his involvement in Indiana politics by being a citizen-activist and then was asked if he would consider running for State Treasurer. He says after seeing how the state is being run he agreed.

“I had been reading the paper and have been sort of astounded at a lot of the policies of Republicans here so I agreed to do it,” Boland said.

He cites the college savings program as one area that needs more publicity and focus. He also believes that the state should link depositing state funds in state institutions to those institutions offering lower interest rates for students and entrepreneurs.

Boland says he realizes that it may be difficult, as a Democrat, to get elected in Indiana.

“It’s a tough job. This is basically a red state. But I believe it’s changing. People here are good-hearted. I believe there’s some problems here in Indiana just as there are in any state. One is the problem of getting good paying jobs. Indiana now has become the number one state in growth of poverty level jobs and so I see using the power of the state treasurer’s office, we can actually make a dent in those problems,” he said.

“Like candidates Beth White and Mike Claytor, he has experience in public service and knows that in Indiana, we can and must do better. Hoosiers have seen what happens when one party controls everything – the party infighting and personal politics trumps helping Hoosiers. Mike Boland will be a problem-solver at the Statehouse,” Zody said.