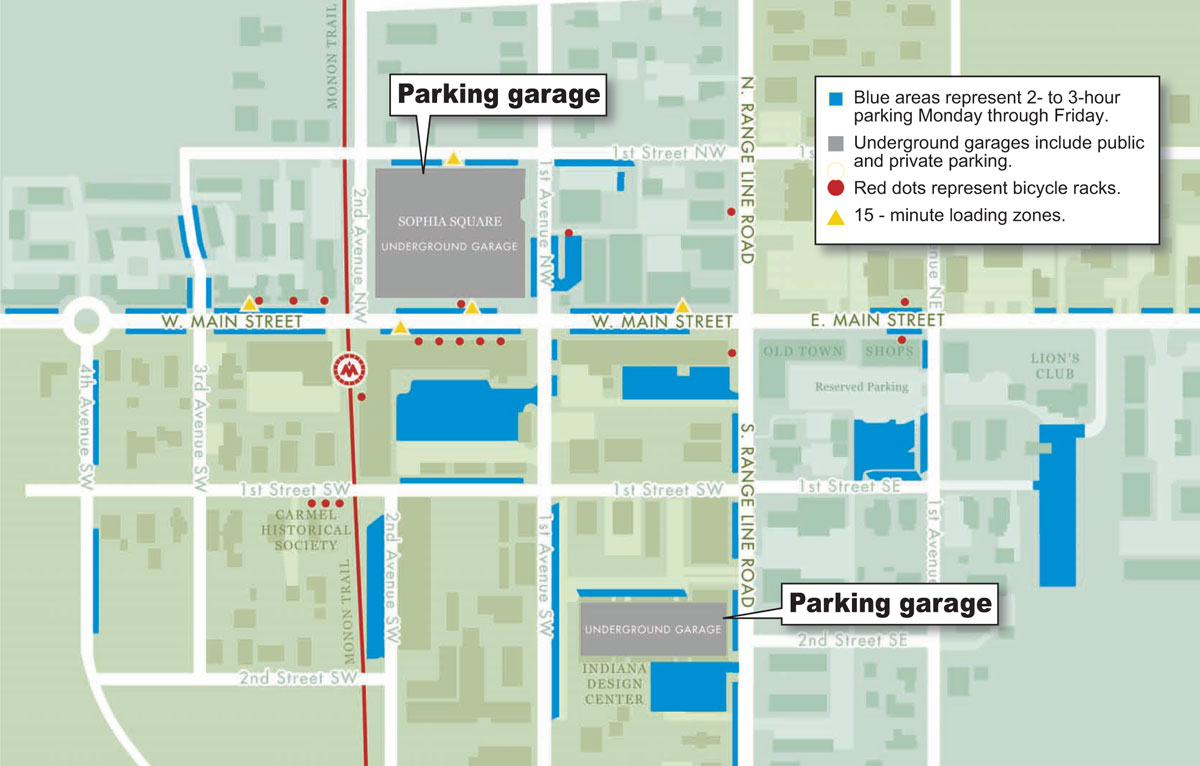 Warm summer days will bring flocks of people to the Carmel Arts & Design District, making it more difficult for people to find that ideal parking spot.

But local business owners and politicians say there isn’t a lack of parking in Carmel’s historic downtown. It’s just that people aren’t aware of the options.

“Something needs to be done,” said Jason Peek, owner of the Main Street Barber Shop. “I feel like people don’t know enough about it, and even though the city has put some stuff, people still ask me where they can park and I say, ‘Well, there’s two hundred spots at this garage right here,’ and they say, ‘I had no idea.’ We probably need to get out to the public better.”

This year, the Carmel Redevelopment Commission spent more than $300,000 to maintain the parking garage at Sofia Square, which is not only available to residents but also to the general public. 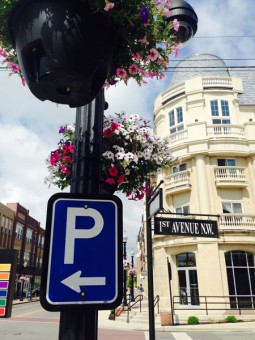 A sign in the Arts & Design District does not point drivers toward a parking garage but instead to a surface parking lot that is usually full. (Staff photo)

Yet not everyone realizes it’s even there. In fact, a big blue parking sign on Main Street across from The Pint Room and Muldoon’s has its arrow face south – in the opposite direction of the parking garage.

“That sign gets really confusing and I have a lot of customers that don’t realize that the parking garage is there and available for everyone,” said Jill Zaniker, owner of the Simply Sweet Shoppe.

As a result, the Arts & Design District Business Association of Carmel (AADBAC) had a meeting to discuss a comprehensive parking plan for the area. Business owners suggested increased visible signage for parking and perhaps shortening Main Street’s two-hour parking limit to only a half hour, to help customers who want to run in and out for transactional business such as picking up a to-go order from a restaurant.

Joe Lazzarra, owner of Joe’s Butcher Shop, said people don’t always walk to park in the garage if they are just going to make a quick stop at a business. He said if more long-term parkers used the garage, it could free up spots along Main Street.

“Not just me, but as AADBAC, we have advocated more allocation for transactional parking where people can park close, do their business and then go,” he said. “I think it could help the District as a whole and be good for everyone.”

Lazzarra said we was working with AADBAC to creating drawings that could be submitted to the CRC, but after the CRC massive debt refinancing occurred, the group decided to hold off on pitching any new projects that needed funding.

When asked about the sign facing the wrong way, city spokesperson Melanie Lentz said she forwarded the issue to city planning administrator Rachel Keesling to see if it needed to be changed.

Mayor Jim Brainard said parking is always a priority, but he prefers to use parking garages instead of constructing sprawling parking lots because it maintains the level of density needed in a commercial area.

“The city carefully monitors parking in the Arts & Design District and the times when one cannot find a place within a block of Main Street are few and far in between,” he said. “As the area continues to redevelop, it is my goal to make certain that sufficient parking is provided, that is unobstructed so that the area doesn’t look like a shopping mall parking lot.”

Brainard pointed out that it’s not just the Sofia Square parking garage that people need to be aware of, but there’s free public parking at the Lions Club and behind the Children’s Gallery.

City Councilor Ron Carter agrees that there is plenty of parking, pointing out that the garage at the Indiana Design Center is one of the city’s best kept secrets.

He said the Carmel Farmer’s Market helps to raise awareness of the lot, which he said always has plenty of space.

“Of course, my wife told me, ‘Don’t be telling everyone about that. That’s our secret place to park,’” he said.

Carter also brought up the idea of working with businesses to encourage employees to park in the garages or at the Lion’s Club lot so the best parking spots are saved for customers.

Carter said he wishes the CRC had the money available to acquire all of the parking south of Main Street, behind businesses such as Old Town Tavern and Donatello’s Italian Restaurant. He said the city would love to repave the lot, bury the power lines and create a barrier-free lot with easy entrances and exits.

In the meantime, Carter said people just have to get used to a short two-minute walk from the garage to a business.

“There’s ample parking,” he said. “People just have to know where it is and you might have to walk a little bit. It’s not going to be exactly front of someone’s business.”