You are at:Home»Current in Fishers»Former Fishers resident discovers acting by ‘accident’ 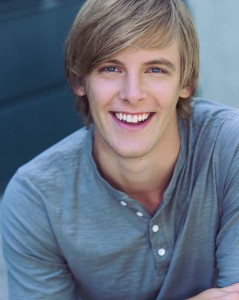 Many actors looking for that break in show business take odd jobs to get by. Waiting tables or bartending are common gigs to pay the rent until finding work, which can take months, if not years.

Just ask Garrett Henson. The 22-year-old former Fishers resident moved to North Hollywood to live in a backyard shack in exchange for watering flowers while auditioning.

Not a bad start for someone who discovered acting “by accident.”

“I’ve always been told I’m animated or ‘make funny faces’ or just a big ball of energy so some of it just comes from me being me,” Henson said.

Henson decided to follow an acting career in his early teens after being involved in a head-on car crash that caused him to reexamine his future goals.

“I realized that life can be gone in a flash,” he said, so (I thought) ‘why am I not doing what I want to right now?’”

Motivation also came from family, including his mother, who made a sudden transition from homemaker to breadwinner when Henson was a teen, as well as friends, such as 23-year-old student Aaron Pugh. Pugh, also of Fishers, recently ran 210 miles from the Soldiers’ and Sailors’ Monument in Indianapolis to Millennium Park in Chicago.

“Aaron Pugh has always been a big inspiration to me, he also went through some pretty tough times as a kid but always just kept going,” Henson said.

Henson, then a freshman at FHS, transferred to Options Charter School in Noblesville so that he had flexible time to pursue acting. During that time, he practiced the art of performing using body language—at church.

“I went to Creekside Ministries for a while,” Henson explained. “The congregation was over 50 percent Deaf. I loved communicating to all of them but I didn’t know sign language so we played lots of charades!”

“When we played in L.A., I knew I wanted to live there,” he said. “Playing in the band allowed me to get out and practice the art of entertainment at a young age.”

Henson credits his launch as an actor by networking, learning, and being on time for auditions.

“In addition, always having a good attitude and extreme respect for everyone I encounter along the way is what continues to fuel that success,” he said.