You are at:Home»Current in Carmel»Carmel Community»Belfry actors stage classic tale of ‘To Kill a Mockingbird’ 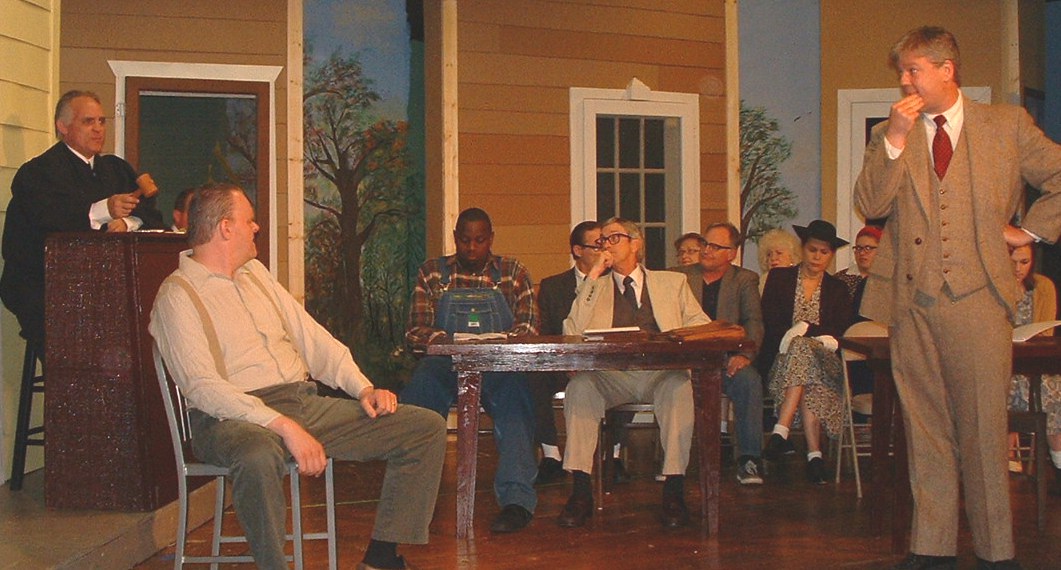 The actors of the Belfry Theatre recreate a courtroom scene from “To Kill a Mockingbird.” (Submit- ted photo)

The stage production of “To Kill a Mockingbird” will be coming to the Belfry Theatre in Noblesville this month.

Based on the classic novel by Harper Lee and directed by Carla Crandall, the play promises to engage audiences with the Belfry Theatre’s small stage and larger-than-life cast.

“As an artist, it’s important to give to the community a realistic interpretation of life. Our job as artists is to help the general public remember our history,” said director Carla Crandall, noting that she also enjoyed giving opportunities to young actors.

The cast runs the gamut from seasoned actors to complete newcomers.

Jack Hittle, who will play the role of Atticus Finch, works as an attorney in real life and is a partner at the prominent Noblesville law firm of Church, Church, Hittle & Antrim. His wife and daughter, both English teachers, served as encouragement to join the production after a 20-year hiatus from acting.

“The chance to play a classic role like this was too good to pass up,” Hittle said.

“This is all totally brand new,” Brown said. “And actually I’ve been very inspired. It’s exciting just watching the other characters do their parts. Everybody’s totally supportive.”

Even the children among the cast say that working on such a production has been a joy.

“This is my first adult play that I’m speaking in, but I’m just as happy. We’ve got an amazing director, and I’ve met so many new people,” said Gloria Merrel, performing as the young Scout Finch.

The Belfry Theatre, which seats 106, draws on the proximity of its small stage to engage the audience in a far more intimate manner than most typical theatres.

“The intimacy of being able to do this at the Belfry, with a theatre this size, brings the story even closer to people’s hearts and minds,” said Thom Johnson, who performs as Judge Taylor.

David Melton, the show’s lighting and set design director, said working on a smaller stage is a unique, if not challenging experience.

“The fact that we’re so close can be a hindrance, but it can work in our favor because we’re so close,” Melton said. “The challenge becomes making the facility serve the art.”

The adult subject matter of the original novel, including racial inequality and sexual assault, isn’t lost on the cast.

Katelyn Maudlin, who performs as Mayella Ewell, said she has a personal stake in the play’s message. Both her brother and sister were adopted from the African nation of Ghana, and her brother experiencing bullying based on his skin color after moving to the United States.

“Sometimes you need to be reminded of how far we’ve come,” said actress Tina Humphrey, who performs as Calpurnia.