You are at:Home»Current in Carmel»Carmel Community»Flotilla offer boaters a chance to volunteer on the water 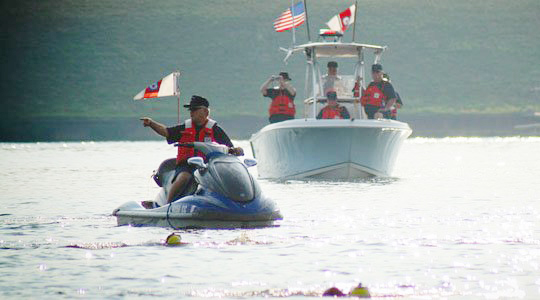 Few people likely think of the U.S. Coast Guard and Indiana in the same breath, but when it comes to water safety, the Hamilton County Coast Guard Auxiliary is hard at work keeping boaters safe.

“We do patrols on bodies of water in the state, Morse, Geist, Brookville Reservoir and the Ohio River,” said Corey Bolon, vice flotilla commander. “We do public education via boating safety classes, provide boat dealers with boating safety information and vessel safety checks – which are free inspections to make sure boats, kayaks, canoes and paddleboards meet legal requirements of state waters and federally controlled ones, as well.”

Chartered as a Flotilla in June 1979 in Delaware County, Ind., it moved to Noblesville in the late 1980s as a detachment from an Indianapolis Flotilla. At the time it had more than 10 members but currently is holding course at eight.

“In the Coast Guard you have three entities – active duty, which are the regular, every-day guys. Then there is the reserves and then the auxiliary which is the civilian component,” Bolon said. “They do the gamut – except law enforcement or military-type operations. Like in the Great Lakes area at a Coast Guard station, it’s not uncommon to have auxiliary members there doing communication work or maintenance, etc.”

Reaction to the Flotilla from boaters is mixed, Bolon said.

“It’s getting better over the years but some people still ask what is the Coast Guard doing here in Indiana and so we explain to them that what are and what we do,” he said.

Bolon has been an auxiliary member since the early ’90s – first in the Chicago area – and in Indiana since 2001.

“We are looking for a people out there like me who want to volunteer their time and ways to do that and this is one – especially if you enjoy boats and boating,” Bolon said.

You must be at least 17-years-old, a U.S. citizen and able to pass a basic background check to be a Flotilla member. Training can range from one to two months or three to four years, depending on the area you want to work in.

“We are definitely in a rebuilding mode this year,” Bolon said. “We have gone through some changes in Hamilton County and are looking to rebound and rebuild.”