You are at:Home»Current in Fishers»96th and Mollenkopf rezoning debated 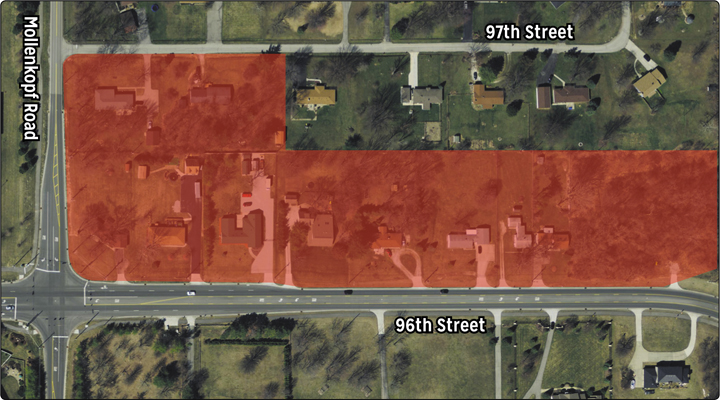 Area in red is subject of rezoning request.

Emotions were on display at the Fishers Town Council meeting May 19 when the issue of rezoning the northeast corner of 96th Street and Mollenkopf Road came up for consideration again.

The rezoning request, which has been presented in the past and withdrawn, was recently refiled to include two more properties. Now there are a total of 11 properties involved in the request to be rezoned for commercial use.

In April, the Planning Commission considered the rezoning request and gave it a unanimous negative recommendation. The ultimate decision, however, will be made by the Town Council.

It was a full house at the May 19 meeting when two people, one of them the original petitioner, Randy Campbell, spoke in favor of the rezoning and eleven people spoke against it.

After the public hearing portion of the meeting ended, Town Councilman Scott Faultless commented that if rezoning requests had always been turned down, most of the people in Fishers today would not be here. He also cited the area of 116th and Olio as an example of negative public input over rezoning. Faultless asked Planning Commission staffers whether traffic projections had been conducted and if any studies had been made as to why space to the west of the area in question has remained empty for long periods of time. Staffers replied that no such studies had been conducted. He then asked if anyone denies that the petitioners have been harmed by the increase of traffic along 96th Street. When not allowed to respond, several members of the public left the meeting, loudly slamming the door behind them.

The other council members who were present expressed a desire, along with Faultless, to find a solution to the problem. Councilman Mike Colby, Council Vice President Pete Peterson and Council President John Weingardt all expressed concern for the petitioning parties and indicated that they felt that a problem exists that needs to be resolved. However, the three all stated that they did not feel the current rezoning request was the answer. All expressed optimism that a solution could be found.

The rezoning request will have a third reading at the June 2 meeting of the Town Council.

In other council action, contracts with INDOT were approved that would move the process forward for roundabouts at 96th and Lantern Road and at 106th and Cumberland Road. Funding for those projects comes mostly from federal funds.