You are at:Home»Current in Carmel»Carmel Cover Stories»So which Carmel roads will get repaved? 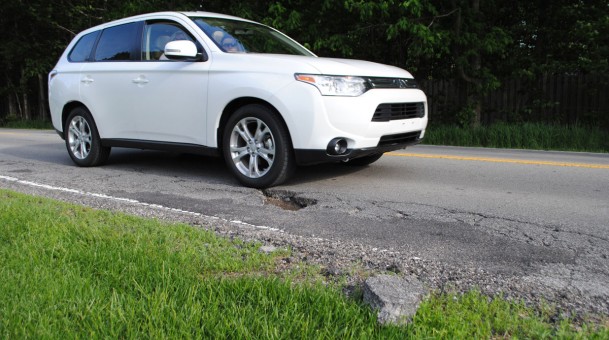 Carmel has so few potholes it can count them, including this one on Main Street east of Gray Road. (Staff photo)

City leaders take pride in Carmel’s roadways. Compared to the neighbor to the south, smooth streets are a luxury to which taxpayers are accustomed.

So when chuck holes started to pop up around town, everyone from Mayor Jim Brainard to the city council agreed more money should be spent on road repairs. But the cause is up for debate. Some say a prolonged winter did its damage to the streets, but others believe the real culprit is budget-makers who have cut back on street paving year after year.

Brainard had asked for an additional $800,000 on top of that, but city councilors were disinclined to approve the additional appropriation because it would move the rainy day fund below less than 10 percent of the city’s budget – which councilors believe is a key factor in determining bond ratings.

How bad are the roads?

If anyone knows how bad the roads are, it’s people who drive all the time for their job. Don Gross, president of AA Indiana Driving School, said he spends a lot of time on the roads and hasn’t noticed this year being any worse than others.

“In the city of Carmel, I know we have some typical winter wear on the roads, but surprisingly I think the roads are good compared to many other areas including Marion County,” he said.

But others see the city streets in poor shape.

According to Dave Huffman, director of the city’s street department, there have been 68 pot holes reported in 2014 compared to 37 in 2013.

This is something Carmel motorists aren’t used to, Councilor Ron Carter said.

“People are concerned because we haven’t had pot holes,” he said. “We need to keep it up with the standard that we are used to and we don’t want to end up like Indianapolis.”

As the Current in Carmel previously reported, there is no list of streets that need work. Off hand, Huffman and Brainard mention areas such as Range Line Road and Hazel Dell Parkway. One of the biggest priorities – Pennsylvania Avenue – was recently completed. Not on this list in the near future is Keystone Parkway, which has seen increased traffic ever since the U.S. 31 closure.

Councilor Kevin “Woody” Rider said he’d like to see work done on Keystone Parkway, but advises waiting until the detours are rerouted.

Brainard said he didn’t want to distribute a list just yet.

“The public knows which roads they are when they see the chuck holes,” he said.

What is the cause?

Brainard cited concerns over politicizing the process, a comment that Councilor Luci Snyder said she disagrees with.

During his pitch to the city council for more money, Brainard said, “We want to get the roads back to where they were after a bad winter.”

But was the winter the cause of our road repair needs?

“I’m not sure I agree that this winter was particularly harsher on the roads,” Councilor Rick Sharp said. “While it was certainly much colder for much longer periods of time that really doesn’t damage the roads so much. It’s the freeze and thaws and intuitively I think we might have had less freeze and thaws this winter.”

Sharp said he believes the weather is a scapegoat and the real reason is because the mayor has “gutted” streets so he can fund other projects.

“It has less to do with the past winter and more to do with past practices over the last couple of years,” he said. “Their go-to reduction has always been roads and street paving and that shows.”

The mayor said he was hit with a double-whammy that caused the cuts – an economic recession and the annexation of Southwest Clay Township.

When Southwest Clay Township was annexed in 2004, it meant the city increased the amount of roads it maintained, effectively increasing the annual need from about $3 million a year to about $4 million. On top of that, there was a contractual agreement to redo all of the annexed area’s roads, which cost $4 million in 2011. That year, the money was funded through some unexpected extra County Option Income Tax revenue, but that meant not much left for the rest of the city.

Exasperating the situation is the fact that annexation tax abatement meant the city phased in the area in terms of tax revenue, receiving only 25 percent in that first year. Brainard wanted to issue a bond to pay for the costs, but was shot down by the council.

Sharp kept reiterating in council meetings that it’s important to note that the initial cuts to road repairs were made by the mayor in his budget. He believes the mayor could fully fund roads if he spent less on other things such as city consultants.

Snyder said the city could have more budget flexibility if so much of the general budget wasn’t dedicated to debt service money. She estimates debt service at about $14 million per year, although those numbers often change.

Brainard said he’s happy to spend more on roads, that’s why he suggested taking money out of the rainy day account, another idea that was shot down by the council out of concern of affecting the city’s bond rating.

He said there is plenty of budget flexibility and expects tax revenues to increase in the next few years. He said everyone agrees that roads are a need, so why fight about paying for it?

How do we prevent this in the future?

All government officials seem to agree that spending a consistent amount on road repaving can save a much larger bill down the road. Huffman said its better to fix a pot hole now instead of resurfacing the entire street when the road cracks into pieces.

“It becomes an issue for the driving public if we don’t get these repairs,” he said. “Not only is it a public safety concern, but it can really damage people’s cars.”

In order to keep up with maintenance, the question comes down to where to find the funds.

Snyder suggests a hiring freeze or caution about issuing new debt. She also suggested breaking out certain projects – such as repairs to Keystone – into a line item that can be approved by the council.

“I’m all for spending regularly on roads, but we should make room for it in the budget instead of expecting to take the money out of reserves or wishing for some funds that might magically come in,” she said.

When the city recently refinanced its COIT bonds, it opted to take the savings long-term with about $200,000 to $300,000 a year in savings. Rider suggested using the savings on roads instead of just putting it in the rainy day fund.

Carter said he has no problem taking money out of the rainy day fund if the streets department and the mayor said they need the money.

“Some of my colleagues on city council seem to always think they have a much better handle on what the needs of the city are, as a part-time legislator, compared to the mayor who is focused on this work sixteen hours a day,” he said. “The mayor and the street commissioner know best.”