You are at:Home»Current in Carmel»Carmel Community»Movie review: ‘Six Days’ that changed the world 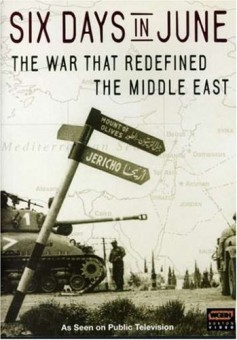 Made 40 years after the war it documents, “Six Days in June” is a powerful lesson in history and human fallibility.

Though it lasted less than a week, the Six-Day War has had a more profound impact on global politics than just about any other conflict in the latter half of the 20th century. Fearing an imminent attack on all sides from mounting Arab forces, Israel launched a preemptive offensive that crushed their enemies’ armies and expansively redrew the boundaries of the still-young Jewish state.

The result was a Jerusalem and Gaza Strip controlled by Israelis but rife with stateless Palestinians, and a Middle East defined by Arab/Muslim antipathy toward Israel. Essentially, everything that has happened since – from terrorist intifadas to broken peace talks – has arisen out of that brief and deceptively decisive military action.

Director Ilan Ziv painstakingly paints a portrait of the geopolitical situation before, during and after the war. Relying not just on archival footage, he also conducts modern interviews with key figures, both Jews and Arabs, from the highest levels of the government to common foot soldiers, journalists and bystanders.

We learn what the fighting was like on the ground – the quick annihilation of the Arab air forces, rendering their forces on the ground effectively impotent as Israeli tanks moved in. Ziv is careful to present the reasoning, emotions and miscalculations of those on both sides of the war.

The film reaches two key conclusions. First, that Egyptian President Gamal Abdel Nasser, the regional strongman who whipped up pan-Arab opposition to Israeli, was a self-aggrandizing bluffer who didn’t really want to go to war – at least not until his side was militarily dominant. Second, that Israeli Prime Minister Levi Eshkol was bullied by his generals into a first blow that won the day but set up decades of resentment and struggle.

“Six Days in June” looks back on that fateful war with clear vision and sobering insight.