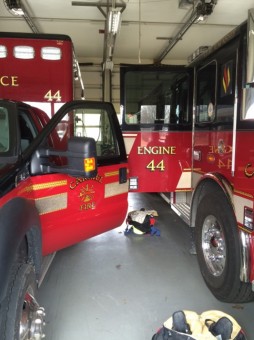 Carmel Fire Chief Matt Hoffman said photos like this one of station 44 show a facility too small to accommodate firefighters’ needs. (Submitted photo)

The fire station at 106th Street and Keystone Parkway could be back on the list for replacement.

The Clay Township Board has authorized its trustee, Doug Callahan, himself a former chief of the Carmel Fire Department, to begin pursuing additional plans to rebuild two of the city’s fire stations on the east side of the city.

While nothing has been set in stone, the township is considering rebuilding stations 44 and 43 at their current locations and building a new training center, maintenance facility and operations center on a parcel it hopes to acquire at 106th Street and Gray Road. The two stations could cost approximately $4.5 million to rebuild and the additional facility could likely cost about $2.5 million according to initial estimates, said board member Matt Snyder.

According to board member Mary Eckhard, all of the firehouses in Carmel are connected through an interlocal agreement between the township and the city. And the township could soon have money to spend on improvements for the fire department.

It will soon pay off a bond used to build two fire stations in west Carmel, and by bonding for new construction at similar terms, board members hope there will be no change in tax rates.

The current tax rate of 0.0074 per $100 of assessed value translates to approximately $17 in taxes per year for a house valued at $400,000. With a 20-year bond, township accountants expect the rate to remain flat and give the township about $5.8 million to spend from a total bond of $6.1 million.

Snyder said there would be no change in the tax rate for the improvements and that any overruns would be paid using the township’s available cash.

Fire department leaders and township board president Paul Bolin said they plan to have a meeting with Carmel schools officials in the coming month about the possibility of relocating the engines and staff temporarily to an area across the street on school property.

Regardless, Carmel Fire Chief Matt Hoffman expressed confidence that residents wouldn’t see a dip in service during the reconstruction phase.

Snyder said no firm timetable has been set, but he’d like to see construction begin sometime early next summer.