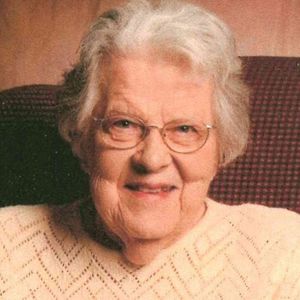 Mary Elizabeth Odenwalder, 98, of Carmel, died April 19, 2014, where she has lived at Summertrace for the past four years. She was born April 21, 1915, in New Washington, Ohio, to Mary Magdalena (Schiska) and John Thomas Studer. She graduated from New Washington High School in 1932 and graduated from Office Training Business School in Columbus, Ohio, in 1934. She married Paul Odenwalder in 1940, and they moved to Indianapolis. They later moved to Carmel in 1969 where she lived ever since. Mary was preceded in death by her parents; her husband; two sons, Robert and James Odenwalder; six brothers, George, Roma, Carl, John, Andrew and Joseph Studer; and a great-granddaughter, Dara Solomon. She is survived by her son, Joseph (Roseanne) of Rancho Santa Fe, Calif.; two daughters, Donna (Bob) Yancey of Carmel and Marita (Greg) Moss of Lafayette; three granddaughters, Denise (David) Solomon of Davis, Calif., Christine (Matt) Brown of Mission Viejo, Calif., and Lisa (Ryan) Kreag of Westfield; two grandsons, David (Christy) Moss of Avon and Ryan (Jeannie) Moss of Oklahoma City; fifteen great-grandchildren, Anna, Sophia, Will and Elizabeth Kreag, Kevin, Jamie, Jessica and Hunter Brown, Lucas, Nathan and Rachel Solomon, and Taylor, Brayden, Micah and Lorelei Moss. A Mass of Christian Burial will be conducted at noon April 25 at Our Lady of Mount Carmel Catholic Church. Visitation will be from 2 to 4 p.m. and from 6 to 8 p.m. April 24 at Flanner and Buchanan – Carmel. Entombment will be in Oaklawn Memorial Gardens Cemetery. Memorial contributions can be made to Our Lady of Mount Carmel Catholic Church or to NAMI Indianapolis, P.O. Box 40866, Indianapolis, IN 46240. Online condolences may be made at www.flannerbuchanan.com.