You are at:Home»Current in Zionsville»Flap ensues on warehouse plan 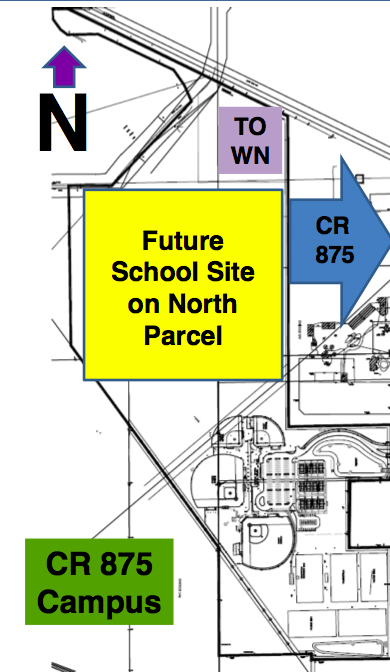 In the middle of the April 14 Zionsville Community School Board of Trustees meeting, school administrators presented the corporation’s current plans for a new maintenance facility to be built on County Road 875.

This plan is a result of the recent land swap agreement with the town of Zionsville.

According to the plan, the town is receiving land at Creekside Corporate Park, located at 106th Street, in exchange for Jennings Field on Hal Sharpe Road. The school corporation originally planned on constructing a maintenance facility at Creekside Corporate Park, however since the land swap they have declared that they will build the maintenance facility on 875.

But Zionsville residents at the meeting weren’t buying into any of the ideas presented for the maintenance facility.

According to homeowners near the 875 site, the maintenance facility will cause traffic congestion, lowered property values and safety concerns. Plus, they said, the land swap is an illegal arrangement, because it was not adequately communicated with the community.

Sandra Parker, a homeowner near the intersection of 875 and Whitestown Road, said that she recognizes the school corporation’s need for growth and need for a maintenance area.

“People move to Zionsville for the property,” Parker said. “And I think everyone sees the need for this facility.”

However, Parker said the current plans and location are no good.

“Would you want this facility across from your home?” Parker asked the board. “I don’t.”

He noted that while the athletic facility on 875, which was built several years ago, increased property values, a large and obtrusive warehouse would lower property values.

“We are all equally opposed to this site selection,” Thompson said.

Kevin Schiferl, a resident who lives on E. 550 S. and a member of the Zionsville Plan Commission, said that one of the most concerning things he’s heard is the decision the school corporation made with the town for the land swap.

“I suspect that if any of the citizens you report to, knew that the decision resulted in taking an industrial building out of an industrial area and putting it in a residential area, no one would have supported it,” Schiferl said.

He said that what the citizens and meeting attendees didn’t see is what the school corporation presented to the Zionsville Plan Commission.

“There was no building on the master plan,” Schiferl said. “That was not in the presentation, Mr. Superintendent, with all due respect.”

According to the master plan submitted by the school to the plan commission, the space on 875 was intended to hold multipurpose sports fields and a future tennis center.

Schiferl referred to a letter, dated July 1, 2009, that the attorneys of Fanning Howey submitted to the plan commission on behalf of ZCS.

“Nowhere in [the letter]is there anything to the public telling us that you intend on putting a maintenance facility there,” Schiferl said.

Oscar Perez, who is on the homeowner’s association board of Cobblestone Lakes, said that the presentation given by the board didn’t say anything about how the maintenance facility would affect the neighbors.

“These [homes]are the biggest investments people in this room are going to make in their lives,” Perez said. “[This warehouse] is not what I want to live next to.”

Jim Longest, ZCS Board Trustee president, told the residents that the board is concerned about the property values of that area.

“Nothing is set in stone,” he said. “We want to be good neighbors.”

Jeffrey Qualkinbush, an attorney with Barnes and Thornburg, spoke as counselor for the school corporation. He said that he strongly advises the school board approve the site location for the maintenance facility.

“In the next several months you must take action,” Qualkinbush said.

He noted that if the school corporation wants to take advantage of funds prior to the refunding of current bonds, the only legal action is to use the 875 land.

“Given the decisions that have been made over the last nine or so years … you’re left with the decision to put the [facility]on 875 somewhere,” he said.

Qualkinbush also said that this location shows a “much more centralized” approach to having a warehouse available for administrative and corporate use, because 875 is near many of the schools.

Bob Bostwick, ZCS executive director of Human Resources and Operations,  said that the need for a warehouse is very real.

“As we add students there’s an obvious need to build schools,” he said. “But we’ve put our maintenance needs on the back burner … and it’s really important that this [facility]is centrally located.”