You are at:Home»Current in Zionsville»CV Gallery to host art dealer 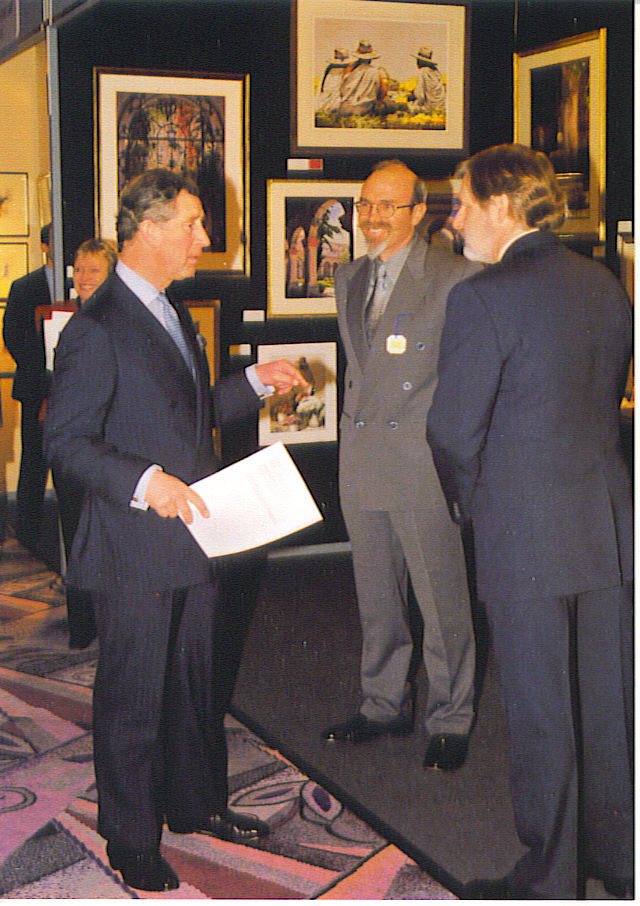 Raul Mercier (center) stands with Prince Charles during a gallery opening in England. His next art stop will be on Main Street in Zionsville. (Submitted photo)

Zionsville residents will be in for a treat next month when Cv Gallery and Frame Shop hosts its number one art dealer, Raul Mercier. Mercier will be attending the shop’s Brick Street Market Eve celebration from 3 to 8 p.m., May 16.

Mercier, originally of Peru, is a famed art collector who has hosted gallery openings for the likes of Prince Charles in England.

Rhonda Crawshaw, Gallery Director of Cv, said she is always excited to see the artwork that Mercier brings to Zionsville two or three times a year.

“It’s all so beautiful,” she said.

Owner of Cv, Barbara Jennings, has known Mercier for more than 20 years.

“When I bought the shop in 1986 it was just a 900 square-foot frame shop,” Jennings said. “But we quickly moved and expanded our art offerings. Raul was part of that expansion.”

Jennings said that over time, more and more artists have asked to be displayed and sold in the Cv gallery, and yet time and time again she had to refuse.

“I’ve learned to pay great attention to detail,” Jennings said. “We continually have artists stop by but we take very few and we have high standards.”

The paintings that Mercier brings to the shop vary from traditional to contemporary. Often times he drives the artwork from his home in Canada, to be sold in galleries around the U.S. and the world.

On his next visit he will bring 350 pieces to town.

Jennings said he normally doesn’t like to interact with the art collectors and people purchasing the items, but he will make an exception for the night of Market Eve.

“He’s usually working directly with the gallery owners, so he’s not typically in front of the art collectors,” she said. “We’re fortunate to have this open to the public.”

There is no cost to attend the Market Eve event at Corner Vise. For more information, call 872-3288. Cv Gallery and Frame shop is located at 110 S. Main St.