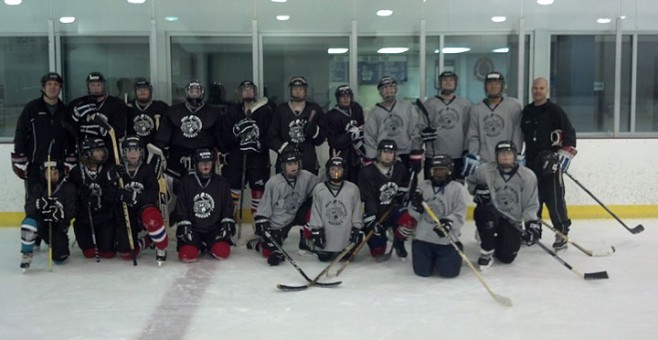 The Indy Twisters special needs hockey team is seeking to draw kids from across Hamilton County to learn the sport. (Submitted photo)

Anyone who has a child with special needs understands that challenges are faced by the entire family day in and day out.

Pressure comes from all angles – from social mainstreaming to mounting medical bills and health care costs. Most often that means having a two-income household with little time in reserve for outside recreational activities.

But the Indy Twisters hockey team is hoping to change that.

The Indy Twisters, who practice and play at the Arctic Zone in Westfield, are a hockey team comprised entirely of boys and girls that have special needs with ages ranging from 5 to 21. While the majority of the players fall somewhere on the autism spectrum, kids with other needs are welcome as well.

The team’s mission is to promote hockey as an activity for individuals with special needs in an environment adapted to each athlete’s abilities. But it’s more than just playing a sport. The program also emphasizes social interaction, dependability, self-reliance, concentration, personal accountability and team play.

The ultimate goal of the Twisters is to help each team member be more successful inside and outside the rink.

The program’s sponsors want to reach out to parents and teachers in Hamilton County and the vicinity to raise awareness for the Indy Twisters program and let them know it exists.

“It’s like a form of therapy for these kids because we’re teaching life skills, not just to play hockey,” Assistant Coach Ed Brennan said. “That transfers to better performance at home, better performance in the schools and the parents see that and let us know they’re seeing improvement from these kids and their self-esteem.”

There are plenty of challenges – both for the players and the men who organize and run the team.

“(The kids) try so much and they fail and I think the reason why they fail is that the coaches and the kids around them don’t have the patience for the challenges the kids have whether you’re playing soccer or basketball,” Brennan said.

Brennan said he wasn’t intending to criticize anyone who volunteers to coach – just that coaches are trying to accomplish a lot in order to deal with kids’ special needs.

Most coaches are unfamiliar with autistic characteristics and how to handle meltdowns and frustrations that often beset these kids.

Those things will happen, which make them a difficult fit for traditional sports programs simply because the majority of coaches don’t have the time or experience to dedicate to a challenged player.

However, when someone has a meltdown when playing for the Twisters, the coaches take a decidedly different approach.

“Whatever that boy or girl needs, we’ll help them. If we need to take them off the ice and go talk to them on the bench, that’s exactly what we’ll do because we want them to come back. It’s a perfect environment for these kids to come and feel welcome”, Brennan said.

‘So happy and successful’

And Twister parents agree based on the testimonials that have rolled in.

“I appreciate the opportunity you gave (my son) to be part of a team and something athletic that he really enjoyed,” an unidentified father wrote, describing Indy Twisters. “His improvement over the year was remarkable.”

“The first time (my child) came out here he could barely stand up and now he’s a very confident skater,” an unidentified mother wrote, describing Indy Twisters. “And I know he feels really good about himself because he’s developed a lot of amazing skills. As a parent it’s really exciting to see him so happy and successful.”

Apart from the participants, the team has hurdles of its own. One of the biggest is funding. Parents only pay a nominal fee for their child to play on the Twisters. Included in that fee are skates and equipment that normally would represent a big expense.

Founder and team President, Steve Tofaute is heavily involved in funding for the team. And he said there are a lot of people who have stepped up to the plate and offered to help.

“The state fair coliseum’s manager has given a lot of help in the form of discounted equipment”, Tofaute said.

He also said that Play it Again Sports in Carmel and others have helped as well.

“We have multiple grant opportunities through USA Hockey, American Special Hockey, and the National Hockey League Players Association,” he said.

He also works with a professional grant writer and can use that individual to write for grants. But with growth on the horizon, there is an expanding need for additional support from individuals and businesses in the community because grants don’t always come through.

One thing the team doesn’t have to worry about is finding the right head coach. That’s because they have Francois Hurtubise – an experienced and caring instructor who won an ISHAA state hockey championship while coaching at Hamilton Southeastern.

“For a (special needs kid) he is the best coach in town, without a doubt,” Tofaute said.

Hurtubise, who also doubles as director of player development, has a special needs child on the team. The same is true for assistant coach Brennan and website administrator Greg Pergal.

All three men can vouch for the benefits the Indy Twisters program provides for their kids. They see the positive life skill transformations developing in their children through this skating program and want other parents with challenged kids to experience that, too.