You are at:Home»Current in Carmel»Column: Forums mean election season heating up 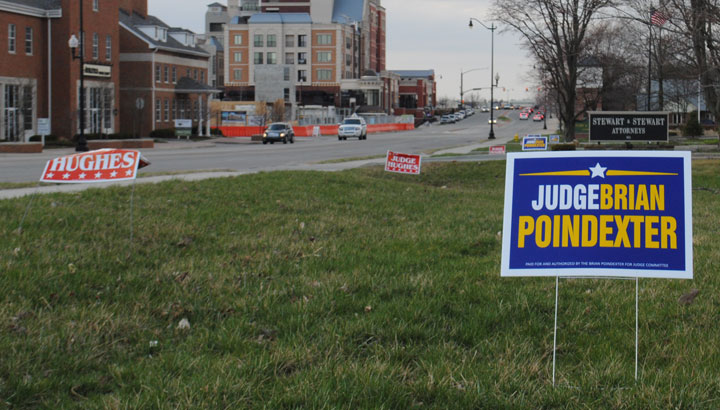 The first campaign signs of the season are starting to appear on lawns and on strategic corners around Carmel. It’s all in preparation for the primary on May 6.

About 30 people were in attendance as candidates like Fred Glynn, a Republican candidate for county council, discussed why voters should support his campaign.

But the evening’s main debate focused on the race to be the next judge of Hamilton County Superior Court 3.

Incumbent Judge Bill Hughes noted that during his tenure, he has maintained expenses at a reasonable level and implemented an effective management system. But he wanted voters to realize what his court focuses its time on – family matters.

Hughes asked for voters’ support saying, “I have a family I care about, and I care about other people’s families.”

Challenger Brian Poindexter, who currently serves as the judge of Carmel’s City Court, highlighted how he worked for Steve Goldsmith and dedicates much of his time serving on the boards of local nonprofits.

Poindexter said he would spend time off the bench working to bring a domestic violence shelter to Hamilton County – something he said it currently doesn’t have.

“A judge has the opportunity to provide leadership in word and deed off the bench,” he said.

The event served as a precursor to the Carmel Clay Republican Club’s candidate forum at 6:30 p.m. April 22 at Central Christian Church in Carmel.

The highlight of that could be the first time when State Representative candidates face each other. And in what was billed as a race about mass transit, transit appears to have the edge.

Torr said polling has shown that a majority of likely Republican primary voters support a vote on mass transit – something voters would ultimately decide in a referendum that’s likely to appear on ballots in 2016.