You are at:Home»Current in Carmel»Opinion: Businesses need city’s support 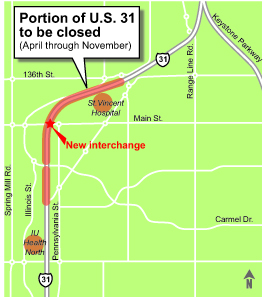 When INDOT announced plans to accelerate U.S. 31 construction and close a section of the soon-to-be freeway between 136th Street and Old Meridian Street this year, many people’s first thought was, “Oh no!”

Many business owners in the U.S. 31 corridor likely had the same reaction. They had been expecting the closure to come in 2015 and were caught off guard when the date was pushed to April 4 with only weeks to prepare.

The closure is scheduled to last until Thanksgiving and it will send a large amount of traffic to Keystone Parkway and spilling onto Carmel’s streets.

This through-traffic formerly meant customers for businesses along U.S. 31, but what could be worse than the closure itself are instructions from television “news” personalities to stay away from the area.

We at Current would humbly disagree.

There is an effective detour for local, non-semi traffic along Old Meridian and Pennsylvania Streets. And traffic along Carmel Drive will still be able to cross over U.S. 31 during the closure.

It is these businesses in the area of U.S. 31 and Carmel Drive that most need your support during the closure. It can take a long time to establish vibrant commercial areas like these with viable restaurants to serve the business lunch crowd as well the surrounding public, and they can just as easily disappear in a few months without customers.

The people who own and work in these establishments are part of Carmel. Just because U.S. 31 is changing doesn’t mean our support for local businesses should, too.