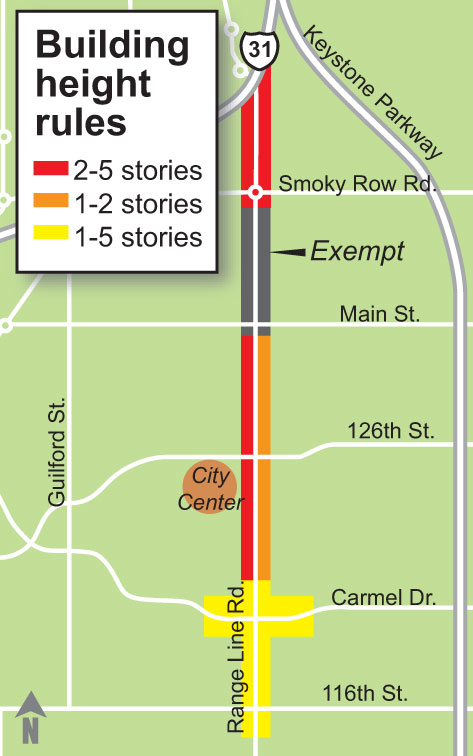 The Carmel City Council is working on new changes to building height requirements, that officials hope will preserve the look and feel of the city without creating profit-slashing mandates.

The new proposal will allow for more one-story commercial development along the east side of Range Line Road, eliminating a two-story rule that brought the city double-decker buildings for a Walgreens Pharmacy, Kentucky Fried Chicken and Turkey Hill gas station.

At the same time, under the new proposal, two-story requirement will be reintroduced for select areas. This is an effort to be fair to those who already complied with the building rule.

Stricter requirements were adopted in 2005, but the law has since expired. This allows room for some compromise and changes when making the Range Line Road Overlay Zone – a permanent fixture in the Zoning Ordinance.

“We thought the compromise made sense when it comes to providing opportunities while protecting those who made commitments earlier,” said Mo Merhoff, president of the Carmel Chamber of Commerce, which supports the rule changes.

The proposal would allow for one-story developments from Executive Drive to 116th Street along Range Line Road, an area where the new two-story Walgreens will open soon. One- to two-story buildings would be allowed on the east side of Range Line Road from Executive Drive to Main Street with west side of the street requiring two- to five-story buildings. Eighth Street to U.S. 31 will also require two- to five-story buildings. The Old Town District is exempt.

Randy Sorrell, owner of Surroundings by Natureworks, a business on Range Line Road, believes this is a smart move and a fair compromise.

“Their buildings sure look great but there are some empty spaces that aren’t being used,” he said. “I’m all for maintaining the integrity or look or feel of the area, but you shouldn’t force a business to go two-story if they don’t need to.”

Some details still need to be worked through, such as a proposal that 35 feet of land along Range Line Road from Winona to Shoshone Drives be dedicated to tree preservation. City councilor Kevin Rider, who said he thinks the proposal is otherwise a fair compromise, is concerned.

“That’s a lot of land to take away from someone’s property,” he said.

The proposal will be discussed in the March 25 Land Use, Annexation and Economic Development Committee meeting.