You are at:Home»Current in Zionsville»Cookies for a cause 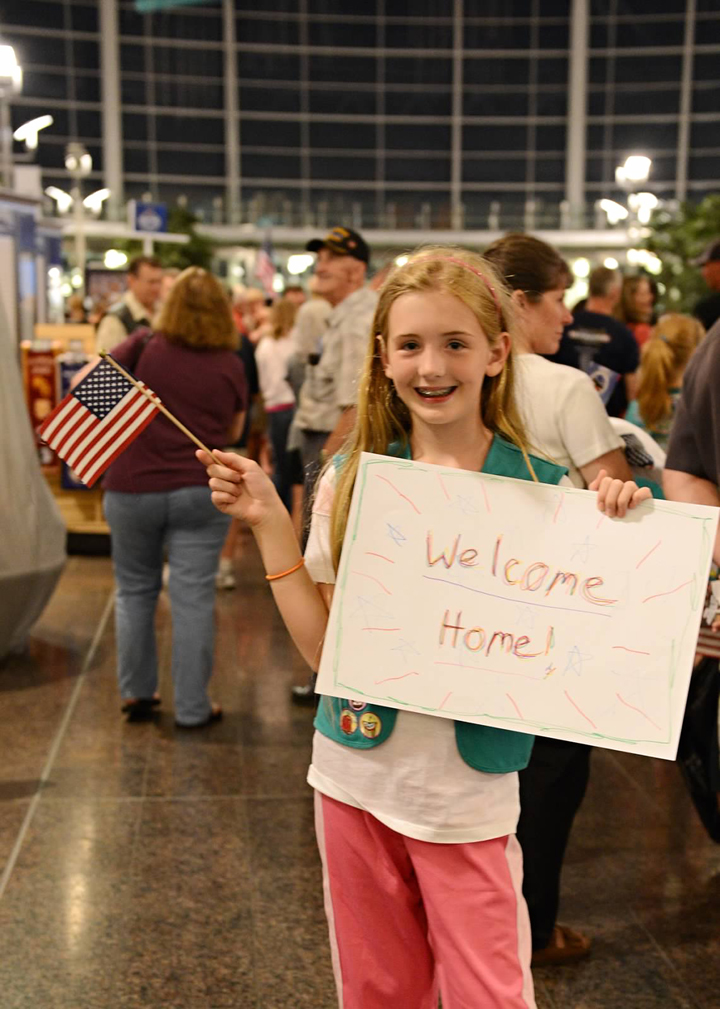 Camilla Wallbank, a member of Girl Scout Troop #1880, smiles as she waits to greet WWII veterans. (Photo by Theresa Skutt.) 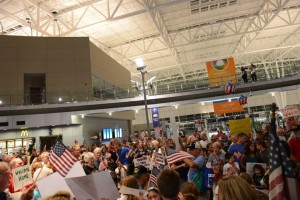 Girl and boy scouts greet the veterans coming home at the end of their day spent in Washington D.C. Girl Scout troop 1880 helped greet veterans last September and were inspired to raise funds to help send more this year.

While most 10-year-olds are saving their spare change for the latest iPhone or a new toy, Kate Swack, a fifth grader at Highlands Latin School, is counting her dollars and raising money to help WWII veterans.

Kate is part of Girl Scout Troop #1880, a group of 20 girls that have been earning badges together since they were in kindergarten. This year, the girls are hoping to achieve their Bronze Award, an award earned when a troop spends a minimum of 20 hours to raise awareness for an important cause.

Troop #1880 hopes to send at least two WWII veterans to Washington D.C. this spring, as part of an initiative with Indy Honor Flight. Indy Honor Flight sends veterans to the capital, at no cost, and takes them on an “honor tour” of all the famous WWII sites. Swack and her troop needs to raise $450 for each veteran to take the trip.

“The veterans did a lot for our country and we need to say thanks,” Kate said. “Some troops raise awareness for things like bullying, but we wanted to talk about our veterans.”

Kate’s mom, Valerie Swack, introduced the girls to the idea of Indy Honor Flight last year when she took them to a welcome home ceremony at the Indianapolis airport. This was a chance for the troop to see the veterans returning home from their one-day trip to Washington D.C.

Valerie said that more than 5,000 people stand and greet the veterans when they return from their honor trips.

“It’s deafening,” she said. “All the cheering is so wonderful during the homecoming.”

The veterans are also greeted with stacks of letters and cards, part of what is called “Operation Mail Call”- a reminder of what it was like to receive mail when they were fighting during the war. 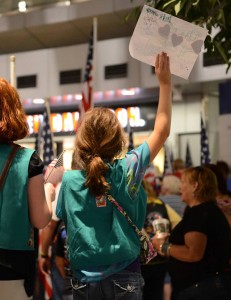 “Tears just stream down [the veterans’]faces,” Valerie said. “They each get a big stack of mail, mostly from people they don’t even know.”

Kate and her troop have already raised more than $400 towards their goal. They did this by asking for donations when they were selling Girl Scout cookies. They hope to raise the remainder of the amount by sending out fundraising letters and by having a booth at Akard True Value Hardware in Boone Village.

The girls will have a booth at the hardware store from 10 a.m. to 2 p.m. on March 8 and 10 a.m. to 4 p.m. on March 22. They will be selling homemade bracelets and baked goods, and also ask that people write letters to the veterans.

“This is completely selfless,” said Valerie. “The girls are learning a lot about themselves and helping others.”

Additionally, while the girls could use the revenue earned from selling scout cookies to plan parties or take field trips, they have decided to donate all of their earnings to the honor flight as well.

Valerie said that sending the veterans on an honor tour this year is part of the troop’s two-year plan. In the summer of 2015, the troop hopes to make a trip to Washington D.C. to see the memorial sites for themselves.

“The girls are only 10 and 11 years old but it doesn’t mean they can’t do something big,” Valerie said.