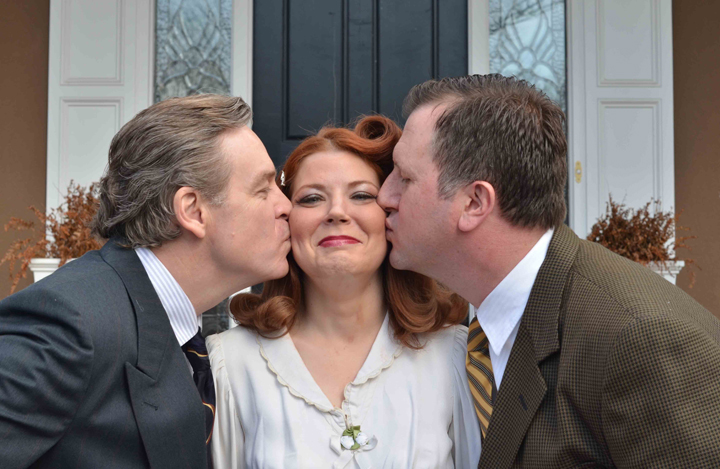 UPDATE: Due to unforeseen circumstances, the opening of  Carmel Community Players production of Phillip Barry’s comedy “The Philadelphia Story” will be delayed one week.  This means there will be no performances March 6 through March 9

The play’s cast is very seasoned as some actors have film, TV and Broadway theater experience in addition to the many who have appeared in several local productions.

In the movie version of “The Philadelphia Story,” Katharine Hepburn’s character Tracy Lord is a headstrong, spoiled daughter from a well-to-do family in Philadelphia torn between her dashing ex-husband played by Cary Grant, charming society magazine reporter Jimmy Stewart and her fiancée.

The play’s director, Lori Raffel, said the stage production is very similar to the movie with some exceptions – there are a few character changes and the location is limited to the Lords’ house outside Philadelphia.

“The play was written by Philip Barry specifically for Katharine Hepburn to star in on stage. Her last several movies had tanked and producers were losing faith in her ability to draw an audience,” Raffel said. “Katharine herself put up 35 percent of the money to produce the play on Broadway, and it paid off – it was a huge hit. She and the playwright always had in mind to make the play into a movie – and that was a big success as well.”

“Above all else, The Philadelphia Story is about love, relationships and family. It’s one of the most successful American comedies every produced,” Raffel said. “I wanted to direct it because I love the time period – the 1940’s – and I love the central character – Tracy. She is strong, stubborn, flawed and fearless – which makes for a great play.”

“The Philadelphia Story” ● Performance are 7:30 p.m. Thursdays, Fridays and Saturdays; 2:30 p.m. on Sundays; March 13 through March 23 ● Carmel Community Playhouse at Clay Terrace Mall ● Tickets are $15 for adults; $12 for seniors and students ● For more information visit www.carmelplayers.org.