You are at:Home»Current in Carmel»Delph controversy creates attention for opponent

A Senate move that delayed a referendum on the ban angered the conservative, leading him to vent his frustration against his own party leaders and a, “self-absorbed Godless culture that is fast tracking our nation to ruin.”

But Delph wasn’t the only one up late, firing his fingers on the computer keyboard. 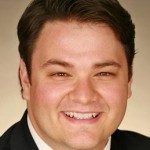 J.D. Ford, a 31-year-old running for office for the first time, was flooded with texts and comments on Twitter. Ford, an openly gay Democrat, hopes to defeat Delph in November’s general election.

“He was really kind of berating his constituents,” Ford said. “So I think people said, ‘We’re going to look at J.D. We’re going to see what’s going on there.’”

While many conservatives rallied behind Delph, Senate Republicans didn’t appreciate his Twitter comments and stripped him of his formal rank within the caucus and made him move his seat within the chambers.

Ford said it all led to a big influx of interest in his campaign. His Twitter followers jumped from 50 to 500. On Facebook, his page-likes jumped from 700 to more than 1,200. In that week after the Delph news broke, his campaign received about $2,000 in donations, mostly from new donors giving small amounts of about $25 to $100.

Ford said he’s careful how he comments on the situation.

“I think people are tired of the attack mentality,” Ford said.

He said he doesn’t wish to focus all his attention on the gay marriage ban. He said just because he is an openly gay candidate doesn’t mean that’s the No. 1 issue to him. He said he believes it is distracting people from real issues such as the economy.

Ford and Delph are both running unopposed in their primaries and the filing deadlines have passed.

Ford knows he faces a tough task. Delph has served in the Senate since 2005, and in his last election, he defeated his opponent by 19 percentage points. Delph raised $43,030 in 2012 when he wasn’t even up for reelection.

But Ford said that doesn’t matter.

“Glenda Ritz (Indiana’s Superintendent of Public Instruction and a Democrat who resides in Carmel) didn’t have as much campaign money as Tony Bennett, but she won,” he said.