You are at:Home»Current in Carmel»INDOT to close Carmel portion of U.S. 31 in April

INDOT announced plans to accelerate U.S. 31 construction and the changes will mean a portion of the road will close in April and the resulting traffic will be redirected onto Keystone Parkway. 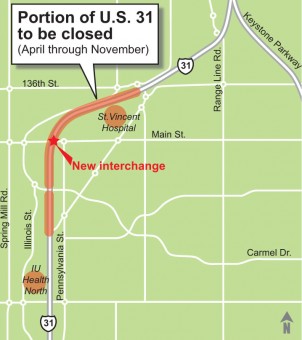 That closure had previously been scheduled to occur in 2015.

Early utility relocations and cleared right-of-way will allow the previously planned closure of U.S. 31 between Old Meridian Street and 136th Street in Carmel to begin on or after April 4.

U.S. 31 will reopen to traffic before Thanksgiving 2014 as construction on the corridor continues through the end of 2015.

INDOT spokesman Nathan Riggs said that although there are no huge cost savings associated with moving the closure dates to 2014, there were just more construction benefits to completing the necessary work this year.

The benefits for motorists and construction crews include:

● Shortening the closure duration to eight months, compared to approximately ten months if the closure were to happen during 2015

● Removing traffic signals from 8 miles of U.S. 31 through Carmel and Westfield by the end of 2014

● Allowing INDOT to honor its commitment to open the new U.S. 31 Hamilton County freeway to traffic by the end of 2015

Keystone Parkway and I-465 will serve as the official detour while Carmel city streets will provide access to businesses on either side of U.S. 31.

Carmel Mayor Jim Brainard said that cars and SUVs can get around the closure by utilizing Pennsylvania and Old Meridian streets.

He also noted that Carmel Drive will remain a viable way to cross U.S. 31.

But is the city ready for the trucks that will traverse Keystone?

“Yes. We started preparing over a decade ago,” Brainard said. “I think Keystone will work well.”

He said there is going to be a period of adjustment required from Carmel drivers, but that a good local road system is going to help.

“There’s been a lot of thought given to detour routes,” Brainard said.

But one intersection that can’t be avoided is the stoplight at 96th Street and Keystone Parkway.

Brainard said it’s a city-maintained stoplight that will need to feature a long north-south green light.

Riggs said INDOT will be modifying signage along Keystone Parkway, evaluating traffic models and constantly working to monitor the roads for improvements.

The new U.S. 31 Hamilton County project team has scheduled meetings this week to help businesses and emergency responders to prepare for the effects of the additional traffic.

Public open houses are also scheduled in mid-March. Both open houses will run from 5:30 to 8 p.m. with a presentation at 6 p.m.

“We want to make sure that the businesses along the corridor are getting updates, and that we’re hearing their concerns as well,” Riggs said.

For updates on the U.S. 31 closure in Carmel, the public is encouraged to: