You are at:Home»Current in Westfield»Frankenstein’s new father

Westfield resident Greg Kishbaugh said it was a seventh grade writing assignment that got him hooked on writing.

“I wrote a sequel to King Kong. I still remember my teacher reading it in front of the class,” he said.

The thrill he received from hearing his writing aloud was quickly tempered though.

“When I got it back I saw the first red note, ‘if it was so hot why did he put a jacket on?’ I learned very quickly about the editing side of what you did wrong and how to make it better,” Kishbaugh said. “My first editorial note was that red circle.”

From that day, Kishbaugh said he wrote short stories and graphic novels all through high school and college.

“I love writing. I’ve been writing since I was in seventh grade pretty continuously,” he said. “I write through lunch or go to the office early to write.”

His dedication to the craft has led Kishbaugh to publishing his first fictional novel, “Bone Welder.”

“We’ve already sold out of the first two orders in the past three weeks (at the local Barnes & Noble store,” Donna, Kishbaugh’s wife, said.

“It’s motivation to keep at it,” he said.

“He got me to read the most,” Kishbaugh said of Bradbury.

Although he was concerned what it might expose, Kishbaugh red Bradbury’s biography and was pleasantly surprised.

“You never know what will happen when you hold your hero to the light,” he said. “I loved him as much after I read it as before,”

After reading the biography, Kishbaugh wrote to Bradbury and heard back.

“That was pretty awesome quite frankly,” Kishbaugh said. “I reached out to him and he wrote me the most wonderful letter back. He received 300 to 500 letters a day. To receive a two-page letter back was pretty cool.”

Kishbaugh said it was Bradbury who encouraged him to enter the Ray Bradbury Fiction Writing Contest, which he won first place in 2007 for his short story, “Magnificent Desolation.”

“I left it unpublished since that time,” Kishbaugh said.

Kishbaugh has been an editor/publisher for 25 years. He is a consulting editor for Evileye Books, overseeing manuscript development of new series and standalone books for the publisher, which specializes in horror and speculative fiction.

“It’s a big help knowing the business side. It’s changing so rapidly – the electronic aspect of publishing,” he said. “The thing I’ve learned most is to be much freer with the first draft. Writing is a long process.”

“Bone Welder” is not the first time Kishbaugh’s works have been published. He has appeared in several anthologies, as well as renowned horror magazine, Cemetery Dance. He also is the editor of the Burning Maiden anthology series produced by Evileye. Described as “where literature and the supernatural meet,” Burning Maiden Vol. 1 is a collection 16 new short stories from bestselling authors.

“I asked authors I like if they would participate. People whose books I really liked,” he said.

The book included National Book Award winner Charles Johnson and Kishbaugh, who blindly submitted his work to the publisher before including it.

The next volume is planned to be released in January 2015. Kishbaugh said the series will be released annually after the third volume in 2016.

Kishbaugh grew up with the original Frankenstein movie and book.

“I thought if he’s immortal than that means he’s still alive,” he said. “They could not kill him. He’s still wondering around the North Pole. That was the launching point of the idea.”

Kishbaugh said his first draft was “really, really long” – 150,000 words at one point – and his biggest test was to cut the word count down by more than half.

“It was a lot of fun. You really grow to enjoy after you’ve been writing for a while,” he said. “You put it aside for awhile – try to read it as an editor, as someone who didn’t write it.”

In the original version, everyone dies in the end of the first draft and then several people suggested that Kishbaugh change the ending to provide more novels.

“There are so many possibilities. The more research I do the more all these doors open up,” he said.

Kisbaugh plans to make the book into a series of at least three, but it won’t be a trilogy.

“You don’t have to read the first book before the second one,” he said. “The three will standalone but they’ll be a lot more fun to read all three.”

Kishbaugh said his purpose of writing is creating something people will enjoy reading.

“I’m huge into story. When I write I’d like every chapter to be a story with a beginning, middle and end,” he said

“Bone Welder” is, at its heart, a modern exploration of the themes first set out in Mary Shelley’s seminal work published in 1818. With deep understanding and respect for the original story, Kishbaugh contemplates the emotional and moral ramifications of science-as-god in seeking dominion over death.

“Entertaining myself is No. 1,” he said. “I’m writing a book that doesn’t exist. The only way I can read it is if I write it. There are so many things to do with the character and I play them out.” 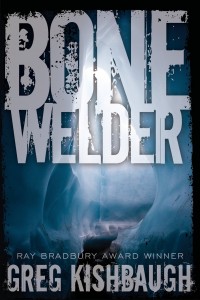 Plot: “Bone Welder” is the first in a horror thriller series that explores the legacy of Frankenstein’s Monster. In this first installment, the monster is re-introduced to the modern world after a near-200-year absence, sought out by a man in search of redemption. But, the destruction he unwittingly unleashes upon the world is more horrific than Dr. Frankenstein himself could have ever imagined. 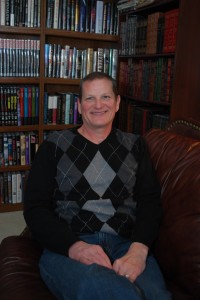 Hobbies: Reading, writing, drawing and is a brown belt in martial arts

Personal quote: “The best time to plant a tree was 20 years ago. The second best time is now.” – Chinese Proverb