You are at:Home»Current in Fishers»Fishers train station project passes despite public outcry 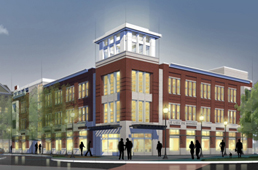 A $28 million mixed-use redevelopment project at the site of Fishers Train Station was passed by Fishers Town Council by 5-2, however, the plan was met with opposition from the majority of Fishers residents that came to voice their opinion at the meeting.

The developer chosen, Indianapolis-based Loftus Robinson, will pick up $18.5 million of the tab, with the Town of Fishers donating no more than $9.5 million.

The town’s goal in creating recent developmental projects is to attract new businesses and professionals for a vibrant community with an attractive town. (In 2012, CNN’s Money Magazine rated Fishers as a top town in which to live, however, it cited “lack of charm” as one of the town’s downsides.)

“Are my work shoes historic because of their age?” he asked.

Other residents, including Allen Ray Davidson, a democrat running for Congress, voiced their concerns about other development projects in the town taking place at the same time, and the unknown success of these projects.

“In my opinion, the train station upgrade should be delayed until the Nickel Plate Depot is up and running and can be proved economically viable in the interest to Fishers,” he said.

Mary Ellen Smith, a resident who lives on 116th Street, shared her fears of Fishers turning into another congested “Carmel.”

“This is getting to be a nightmare,” she said of the several development projects downtown happening at once. “I’m very concerned about the traffic. It’s already terrible.”

Construction of the 3 ½ acre site will begin this summer and finish next year.