You are at:Home»Current in Carmel»Obituary: William D. ‘Bill’ McFadden 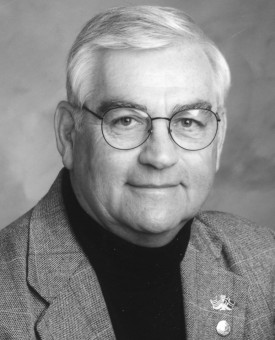 Bill was born April 27, 1937, in Indianapolis, to the late Dwight and Helen McFadden.

He was a graduate of Shortridge High School and Butler University, and he served in the U.S. Army Medical Corp.

Bill was co-owner of Circle City Embroidery. He had been an active member of the Carmel Rotary Club since 1976 and served as president from 1991-92. He was very active in Rotary Youth Exchange and hosted six students who are still part of his family. In 1998 he was chosen as group study exchange team leader to Norway and served as district governor from 2001-02. Because of his unfaltering dedication to Rotary and its youth programs, Carmel Rotary awards an annual scholarship to a deserving high school student named in Bill’s honor.

Bill was a member of St. Luke’s United Methodist Church.

A service celebrating Bill’s life will be conducted at 4 p.m. March 6 at St. Luke’s United Methodist Church, 100 W. 86th St. in Indianapolis. Family and friends are invited to gather from 3 p.m. until service time at the church. Everyone will be invited to a reception following the service at the Knights of Columbus, 2100 E. 71st St. in Indianapolis.

He was preceded in death by a sister, Sally Warwick.

Memorial contributions may be made to The Rotary Foundation, 14280 Collections Center Dr., Chicago, IL 60693 for the Annual Fund.

Arrangements were entrusted to Flanner and Buchanan-Carmel.