You are at:Home»Current in Carmel»Carmel Cover Stories»Carmel filmmaker to premiere feature film 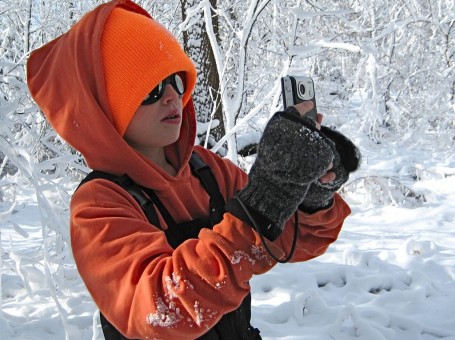 Fourteen-year-old Luke Broyle’s passion for filmmaking has led him to some amazing adventures: raising a dozen baby ducks, traveling to Africa, mastering a zipline in the mountains of upstate New York and meeting people across the globe.

Just eight years after writing, directing and acting in his film at age 6, Broyles is preparing to premiere his eighth feature film and has created 20 to 25 short films.

“I like how movies tell stories and are very captivating,” Broyles said, adding he enjoys filmmaking because it brings stories to life.

Broyles said he is inspired by directors Alfred Hitchcock and Steven Spielberg.

“With Hitchcock it’s the suspense and how he keeps (audiences) interested,” he said. “Spielberg is controversial in a good way. His movies seem a little ahead of their time.”

While making his nature documentary “Bird Brothers,” Broyles was challenged by Heartland Truly Moving Pictures founder Jeffrey Sparks to make a documentary about “someone you care about.” Broyles chose Michael McCarley, a friend from school. The upbeat journey follows him through surgeries to strengthen his legs as a result of cerebral palsy. The film earned Broyles the Schemmel Award from the Cerebral Palsy Association of Greater Indiana and was the 2010 REEL Teens Film Festival audience award winner.

“It was kinda easy (to film) because he knew me and was comfortable with me,” Broyles said.

Broyles’ feature films, which he has written, directed and, like Hitchcock, appeared in, include the “Swords and Shields” trilogy, “G,” “Michael,” “Bird Brothers,” “The Creature” and “Trapped.” For his next feature, Broyles said he is on his seventh draft of a historical fiction film.

“It’s about nine people who are trapped in a room and they have to figure out how to get out and who trapped them in the first place,” he said. “It was hard because you have to figure it all out – it’s a more complicated story.”

The cast of “Trapped” included seven new actors and approximately 40 to 50 extras.

“Most were people I know from school, church, friends of my parents or were a part of past films,” he said.

Broyles said the movie’s idea came to him six years ago and he began writing the script two years ago. The 70-minute-long film was shot on Aug. 4 through 6 in the basement of Verity Institute in Indianapolis.

“Trapped” will premiere Feb. 23 at the Mill Top Banquet & Conference Center, 802 Mulberry St. in Noblesville. Those interested in attending may visit www.facebook.com/TheCreaturebyLukeProductions or e-mail tiggertimbroyles@gmail.com. Broyles asks that guests arrive at 3 p.m. for the free screening. A $5 VIP event will take place at 2:30 p.m. with actors, crew members and desserts.