You are at:Home»Current in Zionsville»Zionsville speaks 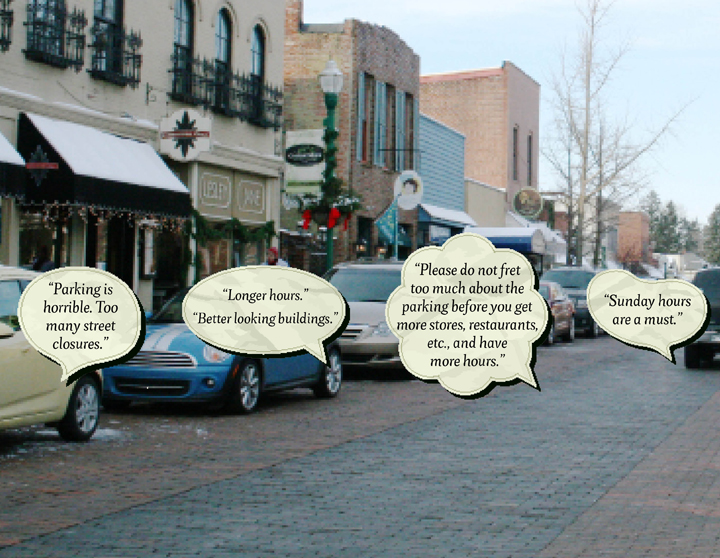 People say the village needs flair and a facelift

Do you shop downtown? Do you drive a car on Main Street or think parking is too congested? These were just a few of the questions that more than 900 Zionsville residents answered last fall in a survey.

According to Director of Planning Wayne DeLong, a consumer survey was conducted as part of a market study and parking analysis that cost $79,000. The consumer survey summary was delivered to the town via companies TADI and Business Districts, Inc. on Dec. 23.

Town Manager Ed Mitro said that this marketing study and parking analysis are an outgrowth of the town’s economic strategic plan completed in Sep. 2012.

“A recommendation of that plan was to focus on the downtown to develop a strategy for its continued growth and success,” Mitro stated.

DeLong said that 901 Zionsville residents completed the survey. Nearly 49 percent of those surveyed have lived in Zionsville for more than 10 years.

Mitro stated that this survey offers valuable information on the consumer use of downtown, and its market characteristics and shopper preferences.

This year the town’s goal is to tackle some of the issues the study highlighted. Below are some of the results and anonymous survey responses.

Within the survey responses, the majority of people commented that they find Zionsville attractive but are not convinced to spend money in the village for what most people call “outdated” items and antiques.

“I would prefer there to be more shopping options that are not necessarily high-end, and more practical, everyday items,” stated one respondent.

Residents shop most frequently in businesses on Zionsville’s Michigan Road and in Boone Village, and shop less frequently in the village, with more than 40 percent stating that they mostly take quick shopping trips downtown, lasting less than an hour.

Half of the survey’s respondents stated they would gladly spend more money and time downtown if there were more specialty shops for groceries and clothing.

When it comes to women’s, men’s and children’s apparel, 151 respondents said they wish they could buy clothing in town but that one barrier to this is that Zionsville stores have limited shopping hours and higher prices.

“I don’t expect stores in downtown Zionsville to be able to compete with big-box stores on everyday items, but I think they could offer more in the way of moderately priced clothing, gifts and accessories. The prices are usually just too high for me, and the clothing is either too young or too ‘boutique-y.’ Also, it would be very helpful to shop in the evenings or on Sunday,” stated a respondent.

Another stated that he or she loves shopping downtown “but wish we had a greater variety of stores.”

The majority of Zionsville residents spend more than $100 dining outside their home every week. Thus, it was vital for the study to show where residents are spending their money.

Survey respondents stated that they tend to dine in the same areas where they shop, such as Michigan Road restaurants, with more than 25 percent dining downtown weekly.

Two hundred, twenty respondents stated that they would “spend a lot more money” if there were more casual family dining restaurants in town.

“Service has to be good,” one respondent stated. “I feel we need more family-friendly quick eating that is better than fast food.”

Outside Zionsville, residents most frequently dine at Panera Bread and Café Patechou. More than 67 percent of people surveyed would spend more money dining in town if there was a full-service bakery such as Panera Bread.

In terms of parking, the majority of respondents stated that parking downtown is “excellent” or “average.”

“(The survey) pointed out that, although there is adequate parking throughout the whole of the downtown, private parking is underutilized and parking could be better identified,” Mitro stated.

“I really like the new sidewalks. I have had some difficulty walking on them with a double stroller,” stated one person surveyed. “Having smoother and wider sidewalks is always nice for a family stroll.”

Mitro said that the next step is for the study’s working group to review the survey’s results in order to chart a plan for downtown.

“[This] meeting will probably occur in mid-February, although I don’t believe a date has been set,” he said.