You are at:Home»Current in Carmel»Carmel Community»Proposed Woodland Terrace apartments to cater to high-end Carmel residents

Developer Justus Rental Properties has announced plans to build a 185-unit senior-living apartment facility northeast of the intersection of 136th Street and U.S. 31. 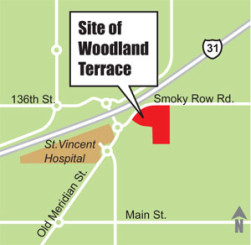 The new apartment complex would be known as Woodland Terrace and feature a mix of 87 independent-living apartments, 82 assisted-living units with available nursing staff and 16 living quarters for people suffering from Alzheimers or dementia.

Justus has planned art, music, and technology studios with a visual arts gallery, techno-lounge and an outdoor performing arts auditorium for the luxury apartment complex. And the facility will have two cutting-edge fitness centers with certified personal fitness trainers to help residents, the company said in a news release.

Preliminary plans showcase a large rooftop garden with an area for outdoor dining that overlooks a designated tree-preservation area. And several on-site restaurant venues including a pub and bistro as well as the Centennial Ballroom, named to honor Justus’ more than 100 years in business, will offer residents their choice of casual or fine dining.

The planned community will feature studios and one bedroom apartment homes, with a limited number of two bedroom penthouse suites. Rents have not been determined, but a spokeswoman for the company said that there would be no units available for purchase.

Monthly rents will be based upon unit sizes and associated service or care levels, the news release said.

Justus plans to break ground on the project in May.