You are at:Home»Current in Carmel»Carmel Community»Local racers enjoy Olympic sport 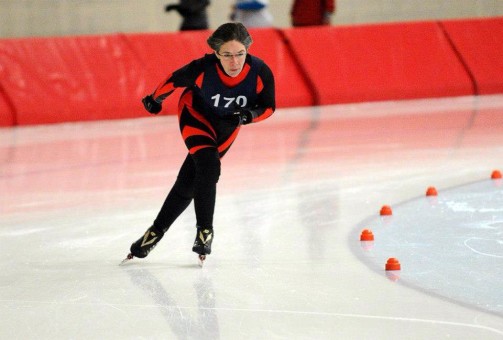 In the land of Hoosier Hysteria where the game of basketball rules, one Carmel family is bucking the trend by speed skating their way to good health.

“I grew up speed skating in St. Louis. We used to buy our skates at the local hardware store. My grandfather and my father taught me to skate,” said Carmel resident Robin Wachtel, 52, on her introduction to the sport.

Wachtel and her daughter Caroline were watching the 2006 Olympics when her daughter asked if they could try the sport of speed skating.

“Who knew there was a club in Indianapolis?” she said. “We went to the “try speed skating” clinic presented by Indy Speed and really enjoyed it.”

As the only speed skater at Carmel High School, Caroline participated in nationals twice, placing eighth both times. But when confronted with the thought of dedicating her life to training for the Olympics, she decided that the lifestyle was not for her, leaving her mother to train on her own.

In September of 2012, Wachtel’s training hit a serious setback when she was diagnosed with Rheumatoid Arthritis and Celiac Disease.

“So I was training and learning how to manage my health at the same time. As I figured out what to eat to manage my disease I kept getting stronger and stronger.”

So strong that she won a bronze medal at the 2013 Long Track Nationals in Milwaukee for her age group.  “I was ecstatic and exhausted,” she said after her finish. “Five years ago I was 30 pounds heavier and completely sedentary. I started with walking to the mailbox and bowling.”

Now she trains by doing pilates, yoga, road cycling and speed skates for leisure – although she won’t rule out competing in the future.